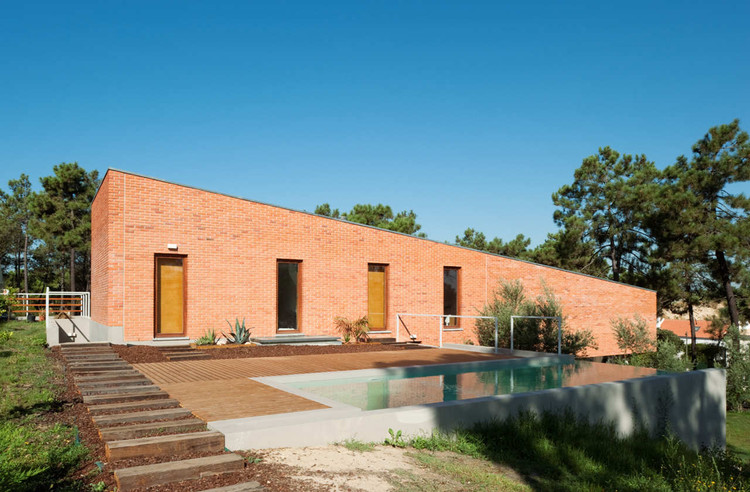 Text description provided by the architects. This house, for a musician, is located in a low-density housing area, near a large pinewood, south of Lisbon. The site had an unusual topographical situation, where the construction of the front street had cut the landscape to form a small “cliff” 3/4m high. The house was thought as a substitution of this cliff, maintaining the original situation overlooking the street, over a high sustaining wall. A patio was excavated as the entrance.

The volume of the house follows the slope of the street and its interior adapts to the topography with different floor levels and varying ceiling heights. The house is partially buried on the ground-floor and opens itself to the garden, on a north-facing slope. The street facade is stepped with three planes, decomposing the single volume, creating rhythm and openings to the south.

The ground floor is divided into two levels. On the first, we find the main entrance, the garage, storage and a gymnasium, and lower, the main social areas, with a double height space in the living room. The top floor has also got a split level: firstly you access a study room, which is linked to a roof-top veranda, unsuspected by the passer-by, and finally you climb to the more secluded area of the bedrooms.

An effort was made to provide direct connection from all the main interior spaces to the garden. This was achieved by building platforms at different levels. One of these platforms includes a small swimming pool and a wooden deck.

By introducing this game of addition as the “operating system” of the project, it is a modular rather than a dimensional precision that is sought for. The modular precision that Mies spoke of when remembering his father fixing the dimension of a house by laying whole bricks, side by side, on the foundations. Because, as any child who plays with Legos knows, you don’t break the pieces, you add one piece to the next.

Besides using bricks extensively on the outside as an enveloping element, we also brought this modular logic inside the house. All of the ground floor was paved with bricks laid side by side, as were the steps, and vertical cladding of walls in the kitchen and the roof-top veranda.

Building with brick can result in an architecture whose character can be opposed to the obsessive rigour its design process involves. By trying to reveal the natural qualities of the chosen materials: clay, pinewood, slate and stucco, together with an open organization of the spaces, we tried to create an atmosphere of relaxed comfort that was sought for by both ourselves and the client. 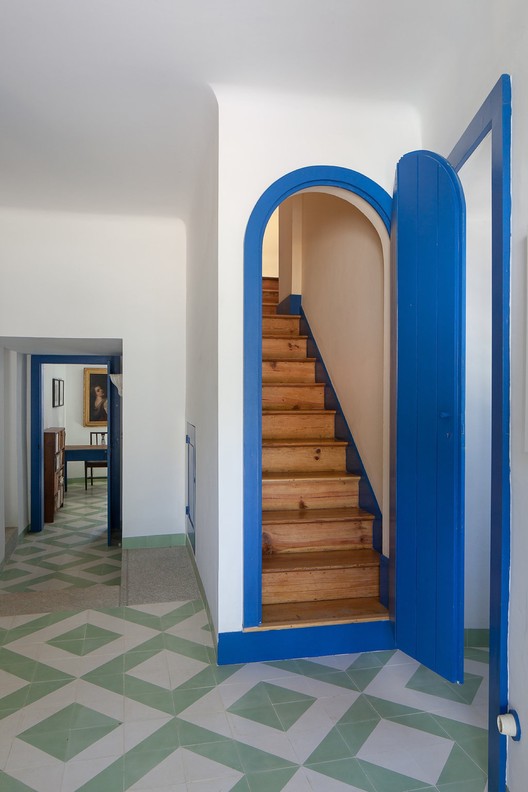