After years of planning and widespread community support, the new Patricia and Phillip Frost Museum of Science, designed by Grimshaw Architects, broke ground in Downtown Miami’s Museum Park just last week. The groundbreaking ceremony took place at the museum’s new site overlooking Biscayne Bay, marking the continuation of Miami’s rise as one of the world’s most culturally rich cities. The groundbreaking event marks the beginning of construction, with the new museum scheduled to open to the public by early 2015. More images and project description after the break.

The 250,000 square-foot complex will be among the world’s most innovative and sustainable science museums. According to Grimshaw – which received the AIA National Honor Award for its design of the Horno: Museo del Acero in Monterrey, Mexico – the Museum is intended to act as a demonstration of ecological and sustainability principles. The building will harness energy from water, sun, wind and even museum visitors to power exhibits and conserve resources.

“We are delighted that the new Miami Science Museum has reached this exciting milestone,” said Grimshaw partner Vincent Chang. “As designers we began a journey three years ago and have seen wonderful ideas from so many contributors coalesce into a truly innovative museum. A museum in which the building itself serves as a significant exhibit, welcoming interaction and showcasing an optimistic story of environmental responsiveness.”

“Groundbreaking at Museum Park is certainly an exciting moment for us, but even more exciting are the new learning opportunities being created both during construction and, of course, after opening. Every aspect of the building, its exhibits and facilities has potential for enjoyable learning, opening doors to new ideas, new opportunities, and new careers,” said Miami Science Museum President and CEO, Gillian Thomas. “The new Patricia and Phillip Frost Museum of Science will be a powerful representation of how science can transform lives and inspire innovation.”

The Museum is structured around a lushly landscaped indoor and outdoor “living core” of terrestrial and aquatic spaces, featuring a 600,000 gallon aquarium facility, a full dome 3-D planetarium, interactive exhibits, innovative technology and two additional wings of exhibition space, learning center and cafes. As construction on the new facility begins, support from the public and private sectors for the museum’s capital campaign remains strong.

characterized by an emphasis on technology and all that it adds to our quality of life,” said Dr. Phillip and Patricia Frost, name donors of the Museum. “We are proud that it will be a major cornerstone in the development of this new reputation.” 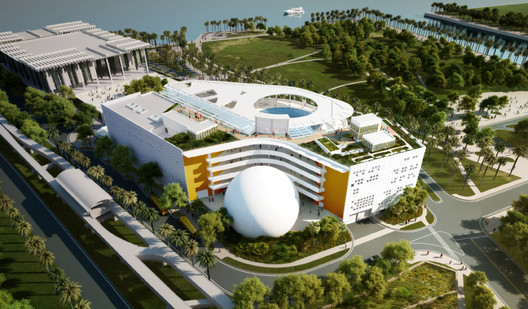