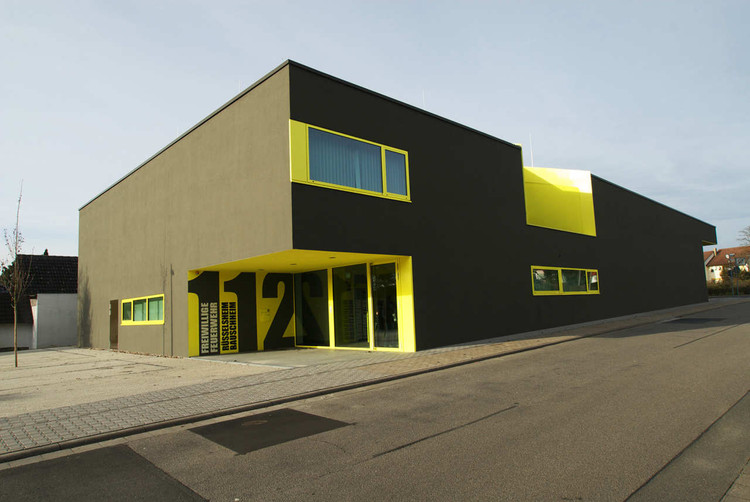 Text description provided by the architects. The new building for the voluntary fire brigade is situated on a main access road leading into the part of Rüsselsheim named Bauschheim on the corner of ’’Brunnerstrasse’’ and ’’Im Grundsee’’. The surrounding built fabric is made up of a heterogenous mix of double and single storey dwellings with hipped and pitched roofs.

The front of the fire station responds to the building line along Brunnerstrasse via a roof cantilever over the facade of the vehicle garage, thus refering to the special useage of the building in its context. The fire engines are in full view through the fully glazed facade of the vehicle garage, as if they were parked inside an oversized display case. A fire brigade on standby mode is the theme here. Through this transparency the building conveys a sense of being in a constant state of readiness, as if it could jump into action at any moment to fullfill its prime function at anytime, thus conveying a sense of security and alertness.

The building is constructed out of conventional masonry, plastered walls, concrete floor slabs and a flat hip timber roof construction with olivebrown plastic roof sheeting. The south of the roof is clad with photovoltaic cells. The compactness of the built form and the resulting low surface area of the volume keeps any heat loss down, consequently the requirements of the ENEV 2009 are surpassed by 30%. Regarding its form of construction, compactness, hip roof and height, the building quietly nestles into the surrounding built fabric. However regarding its plasticity and colourscheme, the building has a strikingly individual character and identity.

Planned as a compact and monochromatic volume into which specific incisions have been made, the building conveys the idea of volume and incision reminiscent of a cut loaf of bread or a sliced kiwi. There is a consistent dark envelope paired with contrasting lightly coloured incisions. Not only does the monochrome dark brown / olive coloured skin of the building create the perfect backdrop for the brightly coloured incisions that mark specific areas such as the front and back entrance, the roof terrace and the entrance/exit to the garage - the dark skin also stands in contrast to the bright interior spaces and bright red fire engines parked in the garage.

Although there are only few windows, the building has a surprising transparency for a fire station. The complete axis of the corridor within the building is flooded with natural light. From within the garage there is also a sense of transparency within the inside structure of the building. The upper level becomes visually connected to the ground floor. The upper level is spatially structured along an axis consisting of the roof terrace, multi purpose space and its spatial expanded bay window. Reversedly at night there is a destinct visual connection from inside to outside via the aforementioned spatial structure been brightly illuminated from within.

The garage is designed for five fire engines. The boot wash and rooms for storage are situated in close proximity to the garage. Along a short corridor further spaces such as changing and washing rooms for men, women and youths are situated. The back house area is comprised of office space, archive- and storage space as well as teaching and group rooms and a large multi purpose space. Due to this array of semi public spaces that are neccessary for a voluntary fire brigade to function, the building has taken on an integral role amongst the towns residents, making it an important part of the community of Bauschheim.

The building was realized by the town of Rüsselsheim, represented by Mrs Hornung and was financed as part of the local special investment programme / ’’2.Konjunkturpaket’’. 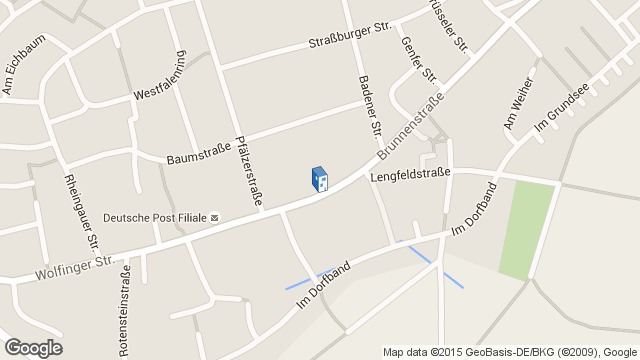 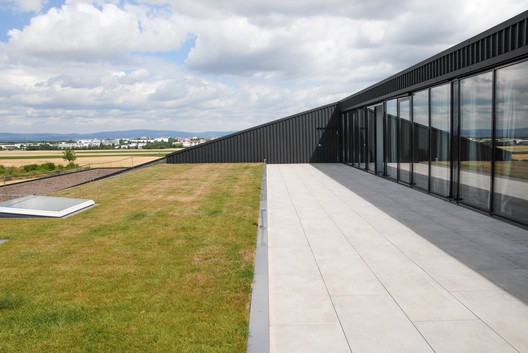