Save
AD Round Up: Zaha Hadid
Share
Or
Copy

Zaha Hadid has been awarded on several ocations, including the Pritzker Prize, becoming the first woman to win the prize. So to start this week of Round Up, we bring you previously featured projects of Zaha Hadid (and an interview).

Zaha Hadid´s project rejected due to heat Zaha Hadid´s extension proposal for the Middle East Centre in St Antony´s College in Oxford has been denied approval by the the Commission for Architecture and the Built Environment (CABE). The comission wrote in their report “it appears unfortunate to position the archive and reading room behind the large south facing window; we wonder whether full sunlight and overheating could potentially compromise the usability of this space” (read more…)

Regium Waterfront Project by Zaha Hadid Zaha Hadid is working on her latest project in Italy, in the Mediterranean city of Reggio Calabria. The project includes a museum and a performing arts centre on a sea strait that separates continental Italy from the island of Sicily. The centre will be visible from the Sicilian coast. See the latest images revealed by Zaha Hadid Architects, here (read more…)

Dorobanti Tower, Bucharest / Zaha Hadid Architects Dorobanti tower, a new project by Zaha Hadid Architects in Bucharest moves away from the works we have been seen lately, with a very expressive structure. The 200m tall iconic tower will be located in the heart of the capital city of Romania, at junction of Calea Dorobanti and St. Mihail Eminescu, with over 100,000 sqm for mixed-use development which include a 5-star hotel (with restaurants and convention centre), luxury apartments and retail space at street level (read more…) 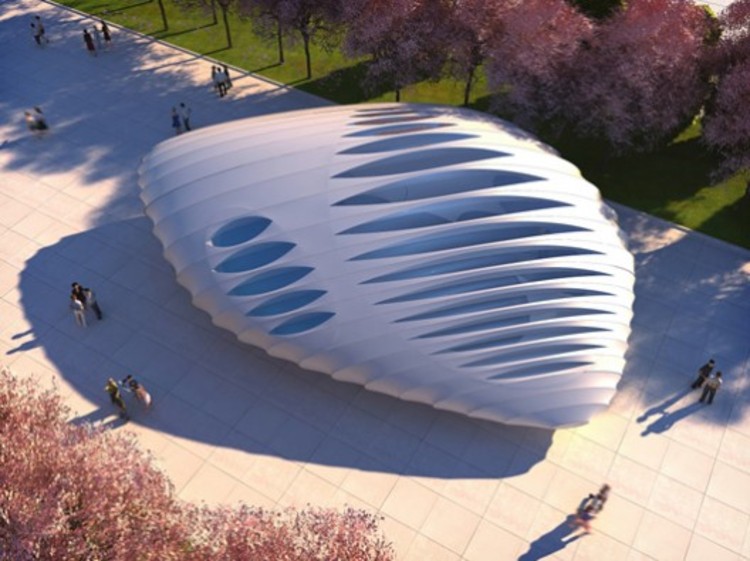 Designs for Burnham Plan Centennial by Zaha Hadid and Ben Van Berkel The architects’ rendering of the two recyclable pavilions were released by the Alderman, the Burnham Committee, the City of Chicago Department of Cultural Affairs, the Art Institute of Chicago and Friends of Downtown. Both pavilions-one designed by London-based Zaha Hadid and the other by Amsterdam-based Ben van Berkel of UNStudio-emphasize the importance of boldly imagining a better future for all, as Daniel Burnham and Edward Bennett did in 1909 in their Plan of Chicago (read more…)

Zaha Hadid Interview The Guardian just feautured an interview with Zaha Hadid. She talks about the aquatics centre for the 2012 Olympics, rebuilding Baghdad and the usual controversy she creates. “Your work is quite divisive. Do you set out to cause controversy? No. But because it’s not familiar at the beginning, people shy away from it.” Read the complete interview, here.