Throughout the past year we have been keeping you updated on the events leading up to the commencement of the Xi’an International Horticultural Expo which ran from May through October 2011 and welcomed over 15 million visitors during its 178-day run. As the largest and best attended international horticultural event of 2011, the Expo offered architects and landscape architects the unique opportunity to design for a traditional event model which became the precedent for the world’s fairs of the 19th, 20th and 21st centuries. To define the expo’s primary experience, the organizers held an international competition, selecting the “Flowing Gardens” project by London-based design firm Plasma Studio and GroundLab. Developed in collaboration with the local landscape practice LAUR Studio, “Flowing Gardens” is comprised of a 37 hectare master plan, including a 5,000SM Creativity Pavilion, a 4,000SM Greenhouse, a 3,500SM Gate Building and various landscapes which run along an extended spine that delineates the site. The project initiated the redevelopment of a large area of Xi’an between the airport and the city’s ancient center, famous as the home of the Terracotta Army of the Qin Dynasty. More after the break. 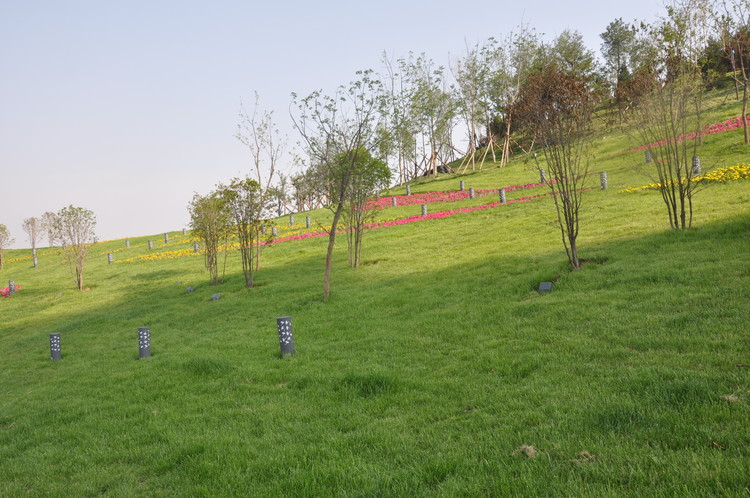 An expo is challenging to plan. As a model, an expo typically serves as a platform to display industry advancements, promote cultural exchange and develop a nation’s brand identity. Due to its vast number of participants, an expo is always in danger of becoming an exquisite corpse, a collective assemblage which lacks any true cohesion. Fortunately, GroundLab’s elegant master plan supported the bounty of content in the Xi’an Expo, leading to its success both practically and aesthetically. Using a collection of sinuous paths, the plan created a network that intermingled circulation, landscape and water.

The success of the master plan is best illustrated by its ability to connect a vast variety of pavilions and content. Like all events drawing from a broad range of contributors, the relevance and level of sophistication varied from exhibit to exhibit. However, the success or failure of any of these individual elements did not undercut the overall experience of the Expo. The ability to experience such an extreme range of content was assisted by the lucid nature of GroundLab’s master plan. The circulation system of the “Flowing Gardens” plan enabled individuals to seek shade when they were on the verge of sunstroke, avoid or join large group gatherings, approach the Expo on foot or by bicycle and truly script their own respective experience. When visiting the site, I was grateful for the abundance of amenities such as public restrooms, water stations, bicycle rentals, and cultural shows. Another interesting feature was a clever and addictive passport book program that encouraged visitors to see as many sites as possible with the goal of filling their passport book with various stamps.

The main architectural features of the Expo included the Creativity Pavilion, the Guangyun Entrance, the Greenhouse and the Chang’an Tower. In addition, the Expo included a variety of gardens such as the Garden of 10,000 Bridges, the Big Dig Garden, the Maze Garden, Four Boxes Garden, the Guangzhou Garden, Eco-Plane, Botanist Garden, Labyrinth in the Mountain, the Hebei Garden, the Shanxi Garden and the Wenchen Garden. European Avenue and Southeast Asian Avenue featured international pavilions inspired by the horticultural and architectural styles of various countries. More eccentric elements such as a Sand Sculpture Park, “The Famous Dogs Museum”, a water ski show, a Brazilian dance crew, and a panda habitat. This variety of features provided a well-rounded and often unpredictable experience for the Expo’s visitors.

Although the Expo closed in late October 2011, the site and many of the buildings will remain as a legacy of the Expo and a catalyst for the area’s ongoing redevelopment.  Planning for the future use of the site is currently underway.