Text description provided by the architects. This architectural work is located on the outskirts of Santiago in the Valley of Curacaví characteristic within the country for its great wines. The site chosen for the house corresponds to the southern slope of the valley and is oriented toward the northwest in the direction of the distant views framed by the hills and vineyards.

The commission was made by a single man who seeks both the solitude and friends company. As a starting point he brought in the image of a Chilean colonial-style house as a reference for his future home. Both conditions give way to solve the central problems in the project, which added to the site conditions guided the following decisions:

Second, take two primary elements of the Chilean colonial architecture such as the courtyard and the exterior corridor to generate distances and circulations between the three areas mentioned above.

Third, align the views in east-west direction towards the longitudinal valley on one side reaching the containment of the hills and on the other hand the escape of the remoteness of the vineyards.

Fourth, within the game of the rectangular plan the ridge is modified as the midpoint and is situated on a diagonal to the central axis of the house. This operation directly affects the spatial organization of the house setting uniquely each area with an irregular relationship between skyes and floors, which is emphasized by the application of the wood sheathing on both surfaces.

The common use sector which contains living, dining and kitchen increases the maximum height emphasizing the relationship with patios and views, avoiding the strong presence of western light by placing the eaves that shape the main corridor, which also constitutes the terraces of the house.

The doors were built on site and in the case of gateways that receive morning sun we added a wicket that acts as a safety enclosure window. All the house has wood floors has been treated naturally in all venues except the living room and hallways, which applies a dark finish. The siding was made in blood red metal, a color widely used in Chilean colonial style houses. 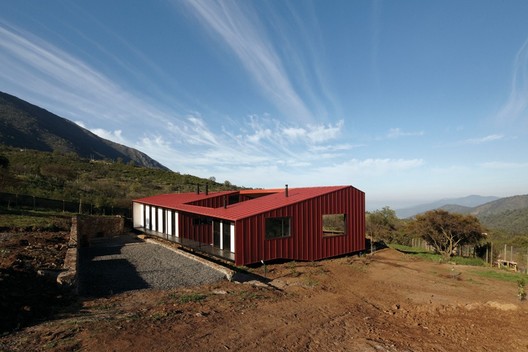