The competition for re-imagining Chicago’s historic Navy Pier has produced some ambitious examples of design ingenuity and innovation. Feeding off of Daniel Burnham’s memorable quote “make no little plans”, this proposal comes from a design team led by !melkprinciple Jerry Van Eyck, UrbanLab and HOK - a series of “dramatic ideas to reconceptualize Chicago’s preeminent exclamation point extending from the Great Lakes to the world”. The intention behind this proposal is to provide a dynamic place in a historic area that provides a cultural landmark as well as a world-wide attraction that stems from the geological history of the site itself.

Follow us after the break for a more in-depth look at this project. 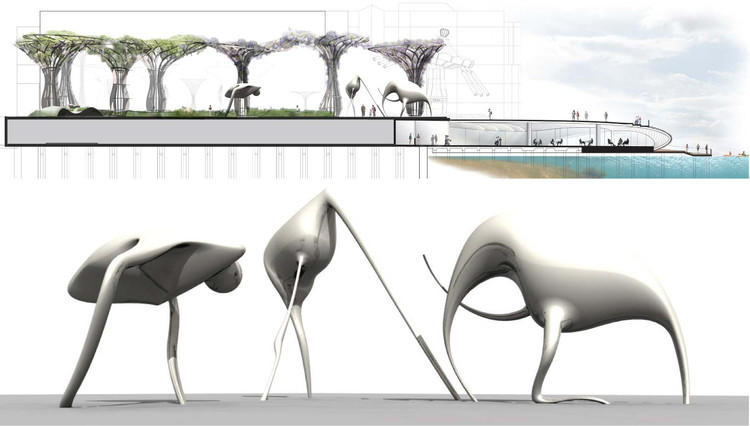 Team !melk’s design proposal was inspired by the mile-thick glaciers of the last Ice Age that formed the five Great Lakes, leaving their impressions behind on the landscape throughout the region.  The “swell and swale landmarks” imprinted on the landscape leave a history of the making of the earth’s form.  Team !melk studied these unique natural phenomena and through a series of topographic waves and curls unified the landscape in relation to the revised Navy Pier.  The invented topography, derived from the accumulated physical history “creates  and opens surprising movements, social spaces, vistas, observation points, places for activities, contact with nature, and art” through open and enclosed spaces along the water’s edge.

Wholly inspired by the sublime nature of the Great Lakes, the proposal is an orchestrated attempt to get visitors to get closer and closer to the lakes.  The proposed design has these moves in “multiple states”, one of which is recreating a glacier – an icon of the Ice Age.  ”The icon embraces water in all its states, especially in the winter when onboard waterfalls create flows of ice freezing the tower into a glacier.  The design also features a “Fish Resort”, a larger version of the existing “fish hotel” which is an attraction to both fish and people.

A connection is also made through the Pier to the urban fabric.  Team !melk observes that, “currently, many people living in Chicago have the impression that Navy Pier is a far-off destination rather than a place to visit routinely,” so part of the design intention is to create interconnections of new and authentic programs that engage the reality of living in Chicago.  A new public plaza and the redesign of Gateway Park are a few of the moves made to achieve this goal.

Phasing is a critical part of this proposal as well, as economic and environmental sustainability are a top priority.  The short term goal is to create an attraction for residents that bring the Navy Pier into their daily lives, while providing something uniquely “Chicago”.