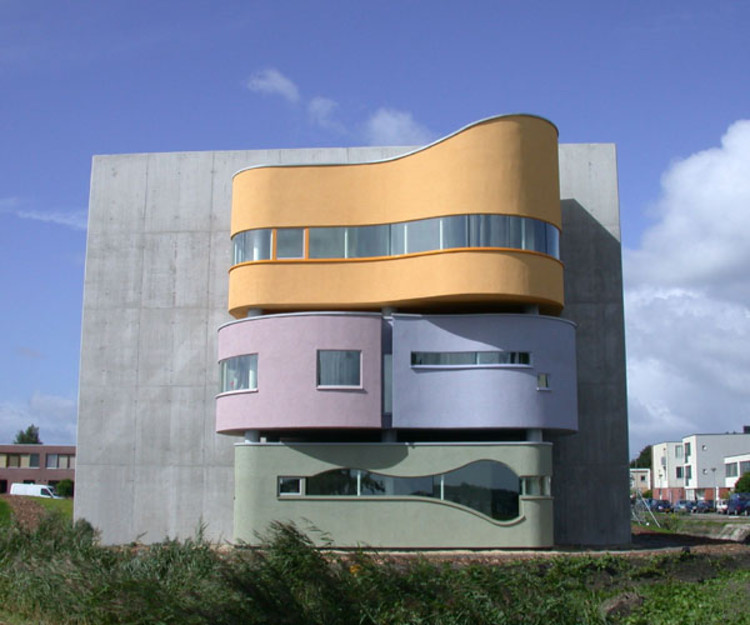 Text description provided by the architects. With a history unlike any other, Wall House 2 redefines the limits of architectural design as a function of context in both time and culture. 28 years after the completion of the initial designs and one year after the death of architect John Hejduk, construction began in a completely different environment than where it was initially imagined.

The house is a study of the relationship between inside and outside and is reminiscent of Corbusian architecture, although a bit more eccentric.

The residence was initially designed by American architect John Hejduk in 1973 for a fellow faculty member at the Irwin S. Chanin School of Architecture at the Cooper Union in New York, to be constructed in Ridgefeld, Connecticut. Due to the high estimated costs of construction in the wooded area, the project was put on hold.

Passing from potential client to potential client, it was always being dropped before the beginning of construction due to lack of funding. That is until a development company in Groningen, the Netherlands, took special interest in the project and decided to fund the construction at 2,500 square feet. It was not until the unexpected death of John Hejduk that construction on the house began.

Wall House 2 is admired for it's fusion of Surrealist sculpture, Cubist paintings and architecture, which reflect John Hejduk's identity as an artist, poet, educator and architect. Inspiration for his work often came from Le Corbusier and Mies van der Rohe, where he learned to focus on the more flat dimensions of architectural form as well as the focus on pure volumes.

Organized around a central axis of horizontal and vertical plane, a three-dimensionality allows for experiencing the spaces. Accompanying these, a two-dimensional plane disconnects but at the same time groups the functional spaces which appear separate from one another while emphasizing the poetic nature of the residence.

Use of light colors encourages visual distinction between volumes, which are accessible by means of a spiral staircase that sits at the backside of the wall. Dividing the space, the wall appears to be freestanding through the careful design of Hejduk, as it is supported with a glass connection to the volumes.

"The wall is a neutral condition. That's why it's always painted gray. And the wall represents the same condition as the time of the hypotenuse in the Diamond Houses - it is the greatest moment of repose, and at the same time the greatest tension. It is a moment of passage. The wall heightens that sens of passage, and by the same token, its thinness heightens the sense of it being just a momentary condition... what I call the moment of the present."

Entering the house, the visitor encounters a flight of stairs which leads to the study, kitchen and dining room, all biomorphically shaped spaces with much character. The first floor contains a bedroom, and the top floor holds the living room. Each volume appears to be cantilevered, but in actuality the floating masses are supported by a grid of columns. This adds to the dramatic design of Wall House 2, as the large wall becomes symbolic, not structural.

An interesting aspect of the recently constructed Wall House 2 is its accessibility; the owners have divided the residence into public, semi-public and private quarters, so that the architecture may be experienced and interpreted by all. Artists are invited to participate in the residence program in which they reside in the building to research the poetics of space in architecture. 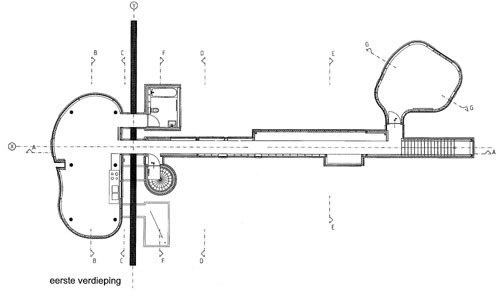