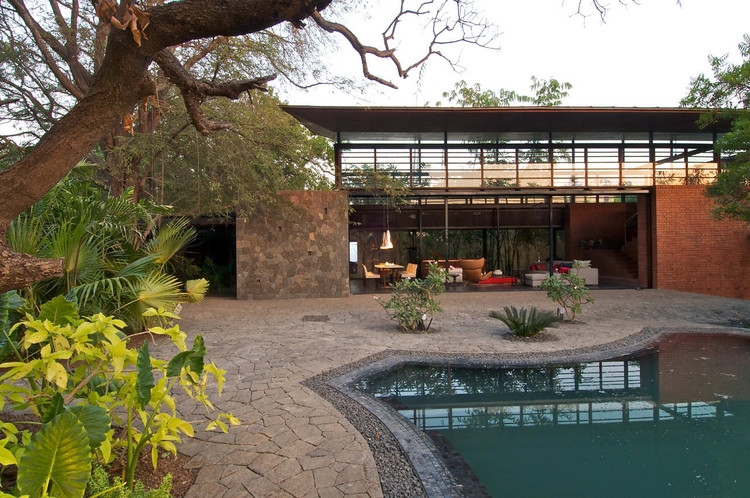 Located in a small village Munavali, proximal to Alibaug, a favorite getaway, for affluent Bombay citizens as a place to build their dream country home.

The allotment (3 acres) was partly a grove of Tamarind and Mango trees , with the odd , Champa, Vad tree. Part of the plot was four feet lower and was, an unkempt paddy field . The front of the property is a not so busy asphalt road.

When driving around the Raigad district , one often chances to see local brick stacks being baked on the green lots that surround them – some remain and are also abandoned ….

These form a peculiar feature of the landscape in Maharashtra.

We, wondered what it would be like to hollow out and inhabit these almost primitive mastaba like forms.

Our interest lay in using this image as a genesis of the house .

Long stretches of the two main wings of the house , sit at right-angles to each other and about a curious tree which has grown at a leaning angle ……

Every room is cut on two sides with openings ,supporting easy cross ventilation and ingress of just the right about of light…..DESI (country) houses have peculiarly dark interiors offering respite from the sun –scorched outdoors…..

Attached facilities, allow for an intimate interface with the outdoors, in marked opposition to urban life, here you wouldn’t need a book when you sit on the pot……

The sequencing of the rooms, is frugal, and in series as a farm building, you must walk outdoors to change rooms…

The living space has a curious shed-like volume, where the materials of the house come together rather loosely ….. Insinuating incompleteness and creating a sense of being immersed in the vegetation around.

The body of the house hides under tree canopies like a gator , at the edge of a river bank….

The choice of BRICK was based on color, strength, finish--- --blemishes of a hand-made unit were key to the overall expression…

The red earth brick does not attempt to be precise, neither does it try to create patterns or jaalis as commonly seen in Indian architecture, the brick is what it is , at rest --- a STACK , its mass concealing and revealing life within it….. The sheer thickness –mass of the brick, keeps the interior spaces comfortably cool.

Experience of occupation takes precedence over formal gestures…. Sun , rain and wind freely enter the house and will mark it over the years …..the stacks will gradually get covered with luminescent moss, nature will fight its way back……. Living in a country home is about witnessing this war…..

The pool, takes form from the shadow of the trees on the earth below, a pattern we noticed on an especially hot afternoon ….. In such regions water automatically becomes a source of life…. Getting engulfed by foliage….

This was a DESIGN-BUILD assignment --- our first as architects…..

We, had one brick mason--- eccentric!, 6 carpenters – with their radios blaring! ,an old stone cutter whose hands as hard as stone gave evidence of his life’s work and our engineer all of 28 yrs- who questioned the necessity, sense and strength of everything from design decisions to construction joints, to frustrating levels!!!

We ,enjoyed building this house…….. 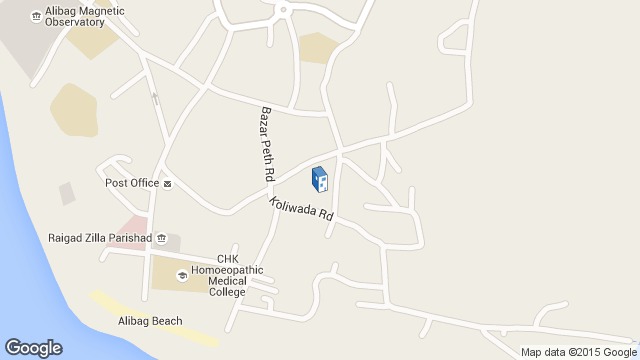 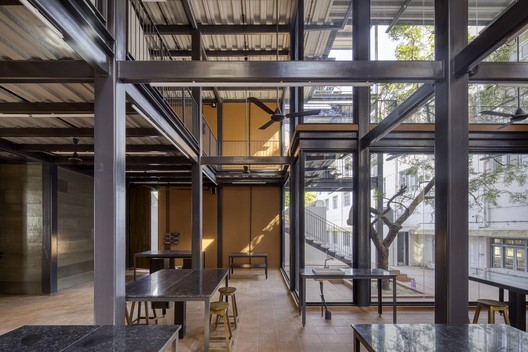