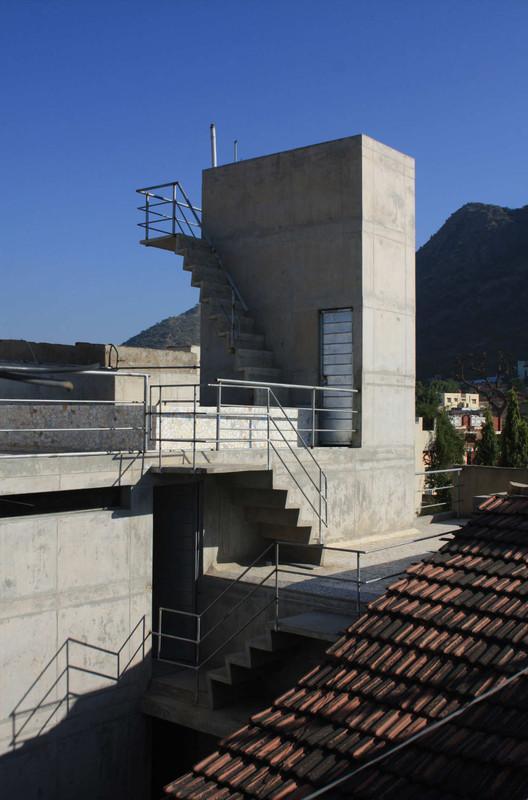 Text description provided by the architects. The Rajasthani city of Ajmer is an important destination on the Muslim pilgrimage trail and its suburb Pushkar also bears huge religious significance for Hindus. With a complex, dense and at times chaotic urban grain, despite its mofussil flotsam Ajmer exudes a slow pace of life. Pensioners typically retire to Ajmer, eager to enjoy its adjacency to both the Aravali foothills and lake below and retreat into laid back twilight years.

The Urban Cast is a residence for the architect’s elderly parents and their visiting sons, daughter and grand children. Conceived as an exercise in the optimal use of space, detail and material, these are refined to their bare essentials. The $22,000 house fits snugly into a humble plot left over by the ramshackle development of Ajmer’s fringes.

With a small budget and a meager 8m x 20m site, the arrangement of the house is derived from an aspiration to enhance the tight spaces afforded by the plot’s footprint.

A 4.5m wide statutory margin to the front, a 3m one to the rear and 2.5m ones at the sides are left open, save for a porch and garage permitted by Ajmer’s planning regulations. The place of the garage is taken up by house’s master bedroom, as it ironically grants the most generous views and thus exerts the most control over the house. Likewise, the two remaining bedrooms are promoted to above the core of the house, creating a clear channel that runs right through the length of the plot and captures the mountain breeze as it drifts down to the city below. This enables both the living spaces and bedrooms to straddle and steal unimpeded axial views out west to the city below to the eastern foothills above.

The key space that the entire composition orbits around is the lofty family area. It grants an ability to be able to be at the core of the house, feel a stack-effect induced breeze run around one’s body and seemingly inflate the concrete building. A 750mm wide bridge and undercroft consolidate the house’s circulation at a vantage point from which one can perceive the house at large. Wherever strictly necessary, ceiling heights rise to a level allowing the safe accommodation of overhead fans and form raised sleeping podiums on the floor above, eliminating the need for beds. Likewise, these podiums are echoed on the roof terrace above to provide a sitting and outdoor sleeping place for the family and grand children. Two stories interlock to fit snugly inside a single story volume.

The simplest possible structural system of 150mm walls and slabs is used throughout, as the thinnest walls possible maximize the house’s usable space. So too, the construction of the house faithfully adheres to the numerology of a 900mm x 900mm module interspersed by runner bands of 150mm. Dictated by the only steel formwork sheets available to the contractor these were the leftovers from the architect’s previous endeavour in the city, the nearby Rajasthan Hospital.

This attitude towards an economy of ends underlies all thinking behind the house. Despite a final cost of only US$150 per sq m, all fittings are repeated bespoke designs, locally fabricated and intended to surpass the roles normally expected of the quotidian elements of building: The opening systems allow for security, the control of natural light, the ingress of the mountain breeze and protection from insects in a simple louvre design composed from bent and riveted GI sheets; Likewise, these same sheets that acted as formwork when the house’s concrete was cast are augmented to become bastardized elements of building. Recycled in the aforementioned kitchen cabinet system to house utensils and conceal services, the denouement of the idea is at the main gate, which still bears the scars of its adjacency to curing concrete. Throughout, the house tries to tell its own story through the multi-valency of its detail.

Result
As the hand laid polished terrazzo floor sits against the dull sheen of the exposed GI fixtures and concrete backdrop, the house is rendered as shifting hues of grey by the harsh sunlight’s soft strike. The house seeks its aesthetic in these tangible statements of economy, as we as architects found its forms in an economy of means.

Upon being confronted with the problem of customizing the formwork for four different concrete staircases, the form of that which runs between the ground and the first floor is transformed through rotating it 90 and deployed wherever a steeper ascent is needed: This augmented replica is cast three times to unite the roof terraces with the water tower, quadrupling the mileage of the pieces of ply formwork. Unable to pander to traditional aesthetic values of plushness, The Urban Cast becomes an investment of economic invention throughout both its conception and form, attempting to celebrate the banality of design restricted by a harsh budget and deliver the most economical concrete house in the world.