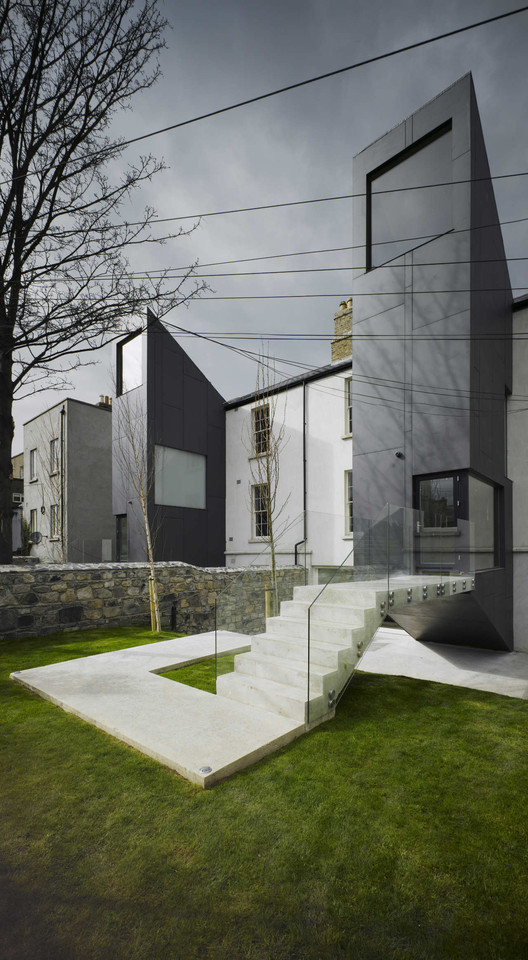 Text description provided by the architects. The properties at 26 & 27 Castlewood Avenue date back to the early nineteenth century and have changed little externally since then. Both properties had originally been built as semi detached residences and were built on wider than normal plots (17m as oppose to 11m) resulting in their double fronted facades and tri-partite plan arrangement. The space to the sides of both properties has been filled in in pastiche style in recent years.

Both properties were in a state of dereliction at the time we were commissioned by our client to oversee their redevelopment. The properties had previously been subdivided into flats (8 in each) and it was our clients intention to restore both properties to single occupancy.

The original returns to both properties had been removed by the buildings previous owners and replaced with a haphazzard arrangement of non descript accommodations. At the design analysis stage of the project it was felt there was scope to introduce a “new” architecture to the rears of both properties whilst respecting their historic characteristics.

The concept behind the two replacement returns was to analyse the function of return structures to the rear of period dwellings on both a programmatic and a visual level. An attempt was made to establish 2 new buildings, to be considered in their own right, while making a meaningful connection between the past and the present.

The new returns to both properties contain the following accommodation; Study at upper level (above first floor level), Family bathroom at mid level and hallway access at lower level. The study at upper level is a dramatic space with its monopitched roof structure acting as a light catcher facing south. Views from this space are towards the Dublin mountains and offer those working in the space inspiration. This space captures vast volumes of light which in turn feed into the lower circulation areas below.

The structure of these returns is a steel frame vertical structure with timber joist infil. The structures are completely self supporting on independent foundations at the rear of both properties and at high level are not structurally connected to the existing fabric. Each return is independently supported on a bridge structure at the upper garden level. The independent qualities of each structure was seen favourably on a planning conservation level as both structures could be removed without serious implication the the fabric of the original houses.

The original design concept was for a pair of buildings with a strong form in an attempt to give the previously understated rear of both properties a new definition.

This is achieved in a number of different ways including the use of a simple palate of materials such as fibre cement panels (charcoal in colour) and large glazed sections.

Full height Opal laminate glazed sections have been introduced in the bathrooms at a mid level for privacy reasons. Other influences in the design and orientation of the building were in part a direct result of the particular site, structural and somewhat onerous planning and conservation constraints.

Both properties are served with geothermal heating (underfloor) and solar heat exchange systems. All downpipes dealing with surface and foul water have been internalised within a central service core ensuring purer elevations and minimizing disruption to the buildings form.

These inhabited forms when first seen first create a sense of wonder and curiosity within the viewer not just because of their sculptural form but more for the setting within which they exist.