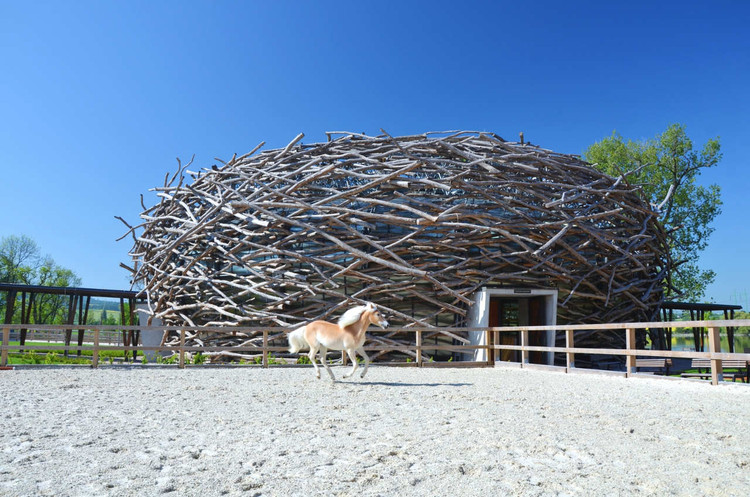 Text description provided by the architects. In 2006 we were asked to design the revitalization of a farmstead for congress, company presentation, holding of corporate events and leisure activities. For this purpose our client bought 19th century farmstead located at a large pound. The farmstead included a distillery with it's chimney. Since 1926 storks have lived on the chimney. It became the main reason for buying this farm.

The farm is located 50 kilometers to the south from Prague. The surrounding landscape reminds piedmont area with large forest complexes, vast meadows, wetlands and a great network of ponds. At the end of the 80's the farm was abandoned and the buildings quickly decayed.The only solitary residents who remained were the storks on the distillery's chimney. The Stork's Nest became a symbol for us, which affected the conception of the riding arena and thinking about all the objects of this project. It wasn't a formal symbol for us. We were fascinated by stork’s fidelity. Almost 90 generations of storks are returning from Africa to the farm and we tried to design the farm in order to bring back people here again.

These birds also fascinated us by their endurance in building their nest. After decades they construct the same, no doubt about the shape and material, still in the same place and with no desire for originality, which bother all architects and builders nowadays. Storks don‘t look for exceptional places. They don‘t want to distinguish themselves and compete with others. Storks became a symbol for us in the approach to construction. Our design of the farm was led in humility to these bird architects. The old farmstead consisted of an enclosed yard of an almost square ground plan and addition of a piggery. The yard contained two dwelling houses, a distillery, a barn and a stable. Valuable objects were preserved and buildings of poor quality we demolished and replaced by new ones.

The residential yard consist of a reception, a hotel, conference hall, restaurant, pool and bowling and house with private garden for VIP guests. Beside this residental yard we have built another new yard for the animals. In this section we have placed a circular riding arena in the shape of a stork nest. It has an external diameter of 34 meters and height of 12,5 meters. The building is used for riding or for a variety of presentations, cultural and social events. Riding arena is located near the stables, and is directly connected to restaurant. The supporting structure is made of glulam timber beams. The external cladding is made of translucent polycarbonate. The oak logs, give the structure an expresive appearance and also provide shading. They were fixed to the building at the total amount of 200 tons at the length of 7, 9 and 11 meters.

At the top of the building there is a central sky-light with a diameter of 8 meters. It serves for intensive ventilation of the internal space by natural air flow. The natural ventilation of the arena provides a good climate. The arena´s riding surface is made of sand with capillary irrigation for equestrian sport. It can be covered with plywood boards during other sorts of events. The riding area is surrounded by a protective barrier and a stand for approximately 200 people. There is VIP stand upstairs.

The Stork nest farm was completed in 2010. The riding arena became a landmark in the area of the farm and an element which attracts attention in wide neighbourhood. Later, our firm designed the center for protection of fauna to the farm and recently a large rectangular riding arena. 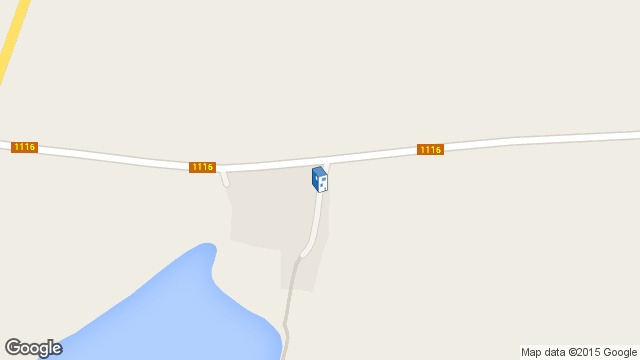