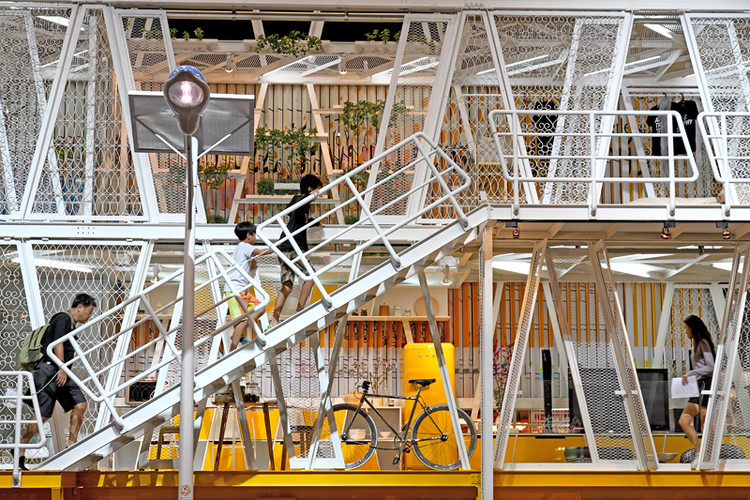 This year Apostrophy’s the synthesis server, Thai multi-disciplinary design firm won the competition. We considered “Billboard house” the perfect combination between O.D.M. (Outdoor Media), the representative of “Capitalism” and “House” the basic need of human being.

Billboard house inspired form the progression of the capitalism that contributes higher competition on advertising media especially O.D.M (Outdoor Media) which are located around the big cities separately. Sometimes their huge structure causes the visual pollution or harms the neighbor accidentally. However they are still be used in advertising industrial because of several advantages as following.

1.The Variety of Technique

O.D.M has been developed all the times that consequence a variety of technique to serve the client’s need

Trivision – it is the combination of 3 billboards by slicing a billboard into 3 faces which each face can rotated and create a new image.

Wallscape – it is the combination of a building and billboard

LED Board – it is the combination of LED screen and billboard

Transit Advertising – it is the combination of vehicle and billboard

2. The Variety of O.D.M size and platform

O.D.M. can categorize into 4 groups by its size S, M, L, XL depend on the objective or the budget of the client

S - Street Advertising and Poster; the smallest and cheapest platform

L - House Advertising; the combination of house and billboard

XL - Bulletin Billboard; the standard platform and Wallscape; the combination of high rise building and billboard

The main component of standard Billboard house is composed by a trailer base as a moveable base for 3 storey house within the billboard structure. For the exterior first side of its façade is composed with trivision billboard. It can change the image on both sides that make it as a kinetic façade create a different pattern on both side of the house. For another side is composed by Thai style blending iron which normally found in house of a big city. This blending iron can be moved and create a different pattern. And up to the top is covered with solar cell roof as a main energy source for the house.

For the interior space, the aim of our design is to utilize all space sufficiently. For the first floor is designed for a living space including a set of home theater, pantry, bathroom and terrace. Next is the second floor is more private, designed for bedroom which has the storage under the bed platform and working area on the mezzanine. Both floors are linked with the stair which utilized underneath space for storage and also a big void to create double volume space and also the set of hydroponic plant on the handrail for the main source of food.