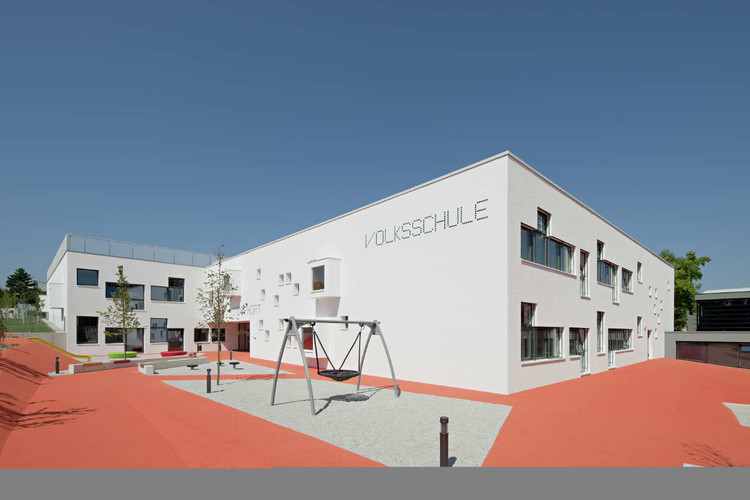 Text description provided by the architects. An influx and increasing birth rate in the community situated to the south of Vienna called for the creation of more, particularly state-of-the-art child care facilities. Therefore a competition tender submission for a new child care centre was issued in 2008. The existing 19th century 'Gründerzeit' school was to be extended by eight primary school classes, a after-school care club and a kindergarten with kitchen.

The association of architects MAGK illiz won the competition and was awarded the tender. The draft of the project team MAGK illiz breaks up the construction into L-shaped bodies which are interlaced in such a manner that different places and free spaces to play in and for learning are formed in the interstices.

Good orientation and quick ways for children and adults are provided by a simple routing system between the functional areas of the two-floor ensemble. The new main entrance to the school is also the assembly hall and connects the existing school building with the new building. The façade is developed as a 'pixeled' white envelope. Format and joining patterns of the "window pixels" meet the current utilisation needs whereby the rooms at the back can be interpreted from outside and the recall value of the individual building sections is enhanced. The façade surfaces alternate between smooth and rough plaster which, particularly in grazing light, creates a vivid impression.

Unlike the high-contrast façade, the design of the interior rooms is characterised by varying, finely tuned colour and material combinations. The differing design of doors, cloakrooms and wall panels in an individual range of colour for each area of activity facilitates finding the way and increases their identification, particularly for the children. The cloakrooms of the children's groups are covered in wood and meander like snails shells into private niches.

"Pixels" protrude into the corridors and from the façade; they are used by the children as nests to read and to cuddle up in. All activity areas have green and free surfaces. The playground used for breaks turns into a climbing and adventure scenery by its dazzling orange rubber surface, the roof terrace with the smoothly concreted surface becomes a race course. Crèche and kindergarten form a common one to two floor patio which forms a settled pacified centre surrounded by play corridors, multi-purpose and action rooms. The colourful door and ventilation elements of the room-high glass façade allow a for an event room to emerge which can be used flexibly. There is a two-floor loggia of a white-coated welded grid and coloured glass pain curtain to the west of the group rooms on the left, in front of the kindergarten. It complements the monolithic character of the building and is both a sunshade and fall-protection. Depending on the viewing angle, the façade appears anything from transparent to closed, from the interior, however, it embodies a protective second envelop, allowing the smallest children a glance into the greenery and conjures colourful spots of light in the room.

The material and construction concept is characterised by the high standards imposed on ecological sustainability. To ensure the building period was speedy, the new construction was setup in a composite construction method with a solid core as storage mass and a prefabricated, high-insulation envelope of timber frame construction, of solid wood panel structure respectively.

The entire new building complies with passive house standards, the aim of which is greatest ease and comfort for the user at lowest possible operating costs.. With an innovative ventilation concept it is possible to achieve a minimisation of costs with regard to the operating times of the mechanical ventilation. For this purpose the classrooms and group rooms are aired by transverse ventilation via acoustic slot openings across the corridor zones without noise from the corridor being transported into the classrooms. This concept also technically ensures that overheating in summer is prevented temperatures dropping at night. Thanks to efficient cost control the overall budget could also be used to redevelop and renovate the existing gym in the scope of this extension. Furthermore, the circulating strip lights could be renewed and provided with circumferential horizontal, partially movable sun protection louvers.

The childcare centre of MAGK illiz is characterised particularly sensitively by the traditional, small dimension structure of the surroundings. The broken building volume is so interlaced that it by no means competes with the environment.

Together with the existing classrooms, the new primary school, the crèche and the kindergarten form one of the largest childcare centres in Lower Austria after a mere period of three years needed for planning and building. 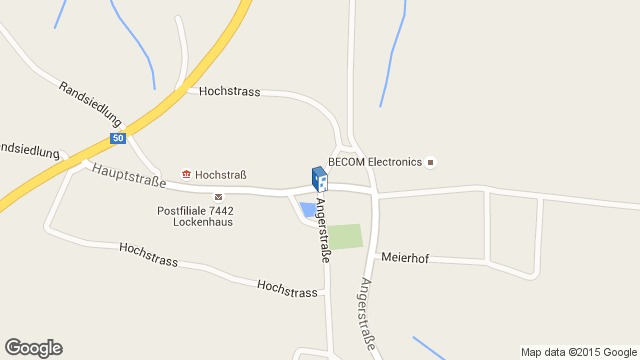 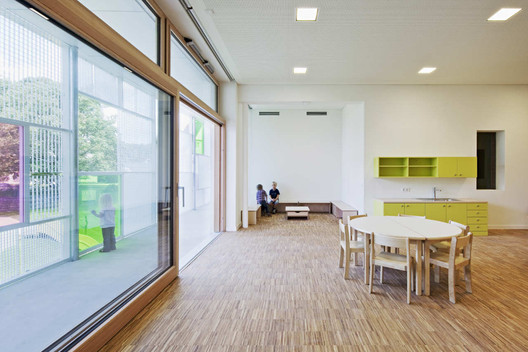 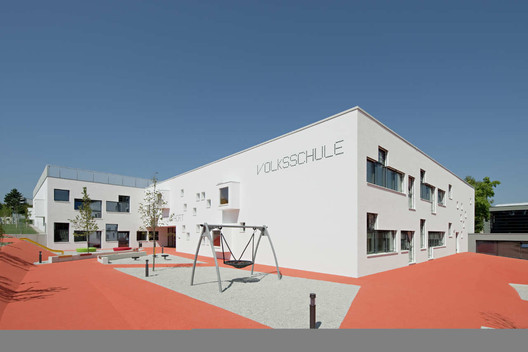