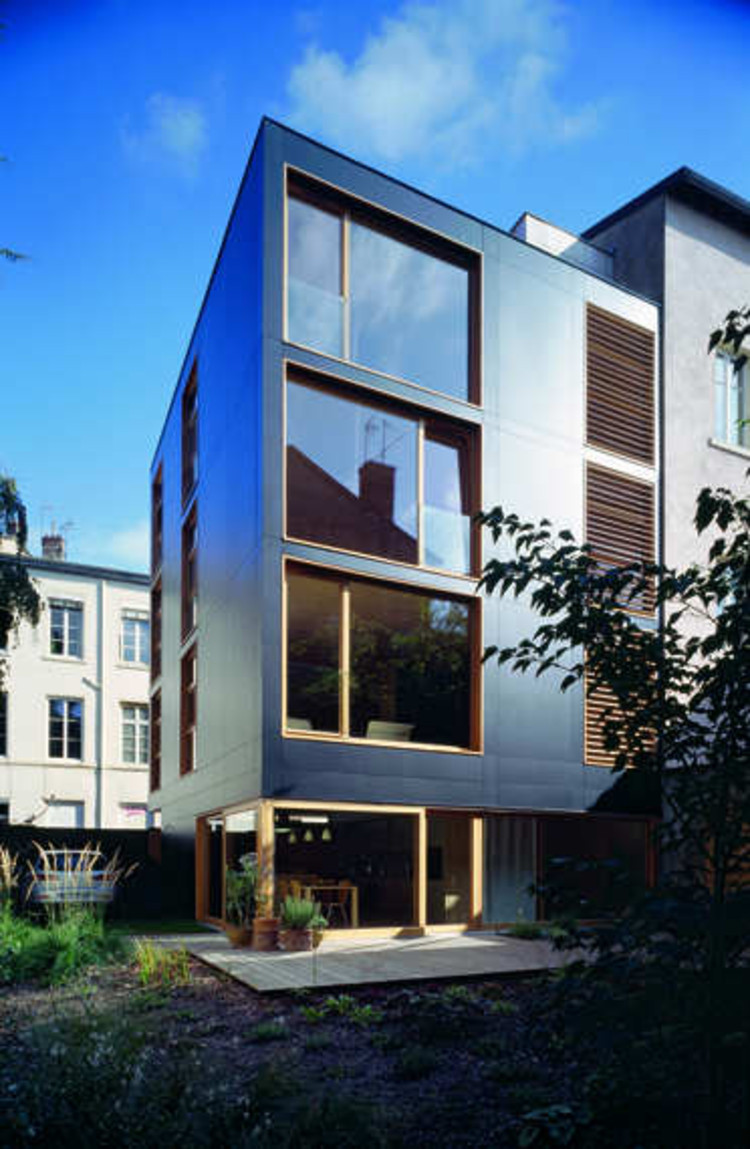 The DI-VA house, whose name is a play on the owners' names, occupies a previously empty space in the residential Croix-Rousse district of Lyon.

Given the narrowness of the frontage, and the fact that there is a building directly opposite, the architects decided to adopt a judo-type strategy. The house turns away from direct confrontation, and exploits chinks in the landscape in order to optimise the views and ambiances. Entirely prefabricated, it was constructed in less than a week. Its sudden appearance came as something of a surprise to the neighbours, whose reactions were mixed. But in spite of its uncompromising colour and form, the building does not express any aggressiveness. On the contrary, it takes its place quite harmoniously in the surrounding topology, with tranquillity and a considerable degree of discretion.

DI-VA occupies a site of 200 m2 that had been abandoned for some years. To the south there is a dense, homogeneous area that was constructed in the 19th century, and, to the north, a group of buildings, miscellaneous in height and spacing, that express a more "modern" spirit. The street (Rue Henri Gorjus) is disparate in character, but there are two broad styles, and DI-VA marks a cutoff point between them. On the southern side, the buildings are aligned, and traditional in character; on the northern side, juxtaposing DI-VA, there is a detached house dating from the 1970s, set back from the street and surrounded by trees, which signals the start of a section that is more open and less structured.

Despite its unimposing dimensions, DI-VA plays the role of a mediator between two periods, and two visions of urbanism. It is attached to a building that terminates the classical sequence of lined-up buildings with windowless gables, while its main facade, on the other side, looks out over the contrasting part of the street. And this asymmetry is accentuated by the subtle treatment of the main entrance. There is a space between the prefinished steel door and the main body of the house, separating the public and private domains, which enhances the effect made by this decentred edifice.

DI-VA is a simple volume, with four identical floors of 60 m2 each. The southern gable is attached to the house next door. The facade that faces the street has practically no openings: it is silent and abstract, apart from a vertical strip of glass behind a wooden lattice that admits light into the staircase and gives a hint of inner life, but without divulging it. There are also inset horizontal openings that bring light and air to the ground floor, but are undetectable from the outside.

The northern facade is the most exposed, being perceptible from the street. The communal living spaces have two vertical columns of picture windows that maximise visibility, including that of the neighbouring cedars.

The western facade, which cannot be seen from the street, opens onto the garden, which is bounded by an aesthetically coordinated wall. It is overlooked by the bedrooms and other private spaces. The western facade, in sum, stands in contrast with the eastern. The former is transparent, the latter opaque.

As champions of prefabrication and "dry construction", the architects proposed that wood should be used throughout. Besides its ecological advantages, this meant that the construction process was rapid, and well suited to the constrained context of the operation. Cross-laminated wood was used for the walls, partitions and floors. It is a material whose properties resemble those of reinforced concrete, except that it can be assembled in a purely mechanical way, in "dry" mode. The different elements were produced by the Austrian firm Binderholz in the form of macro-components, in pine, which is light in colour and homogeneous, with an unobtrusive grain and few knots. The macro-components were delivered ready for assembly by Arbosphère, which specialises in this technique. And it might be noted that the assembly process itself took just five days, i.e. a lot less than the design phase.

In order to minimise energy consumption, while maximising comfort, the design included external insulation for the walls and roof, using 160 mm Trespa Météon panels. The outer frame is in larch, the floors in ash. In sum, all the components are made of wood, or wood-based products.

The house is intended for a couple with three children, but would be adaptable to other possibilities. The living spaces are deliberately simple and compact, arranged around a central core that contains the service networks and amenities (toilets, showers, kitchen). The living room and kitchen are on the ground floor, which opens onto the garden, via a terrace. The communal living space is on the first floor. The second floor is for the parents, with a bedroom, office and bathroom. On the third floor there are the three children's bedrooms, and a bathroom. There is also a rooftop sun deck.

The compartmentalisation of the house in terms of the different levels is counterbalanced by the permeability of the staircase, whose slender uprights make the steps seem to float in the air without interrupting the vertical continuity between the four levels, or the horizontal transparency between the street and the garden. And the glass-fronted wood-burning stove on the first floor, installed without any surround or supporting structure, further emphasises this continuity.

DI-VA incorporates different bioclimatic systems. There is natural ventilation that makes use of the building's triple orientation. The high level of insulation and systematic solar protection ensure thermal comfort, notably in the summer. And there is under-floor heating using a ground-coupled heat exchanger, backed up by the wood-burning stove.

Dark on the outside, light on the inside

The outside of the house is dark, the inside light. Its smooth, taut skin covers a soft, natural interior. This is an archetypical architectural formulation: protective outside, nurturing inside.

The style is consistent. All of the interior, including the ceilings and partitions, is composed of cross-laminated pine panels. There is neither paint nor veneer. On the outside, black bakelite-look panels cover the entire volume, while preserving their lightness, like a cape. This contrast is explained by the constructive choice of an internal structure, clad and insulated on the outside. It is the result of an aesthetic aspiration, where yin and yang create graphic effects in an articulation between two worlds. When daylight is at its weakest, the outer darkness mingles with, and stimulates, the wood-toned light that emanates from the interior. Each enriches the other, softening and warming it. Thus the use of a single material, without decorative effects or excess, gives pride of place to architecture as such. 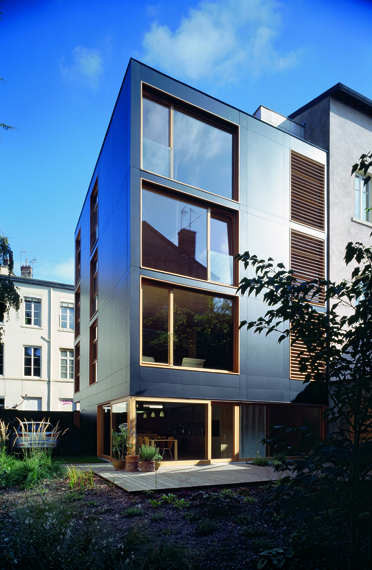