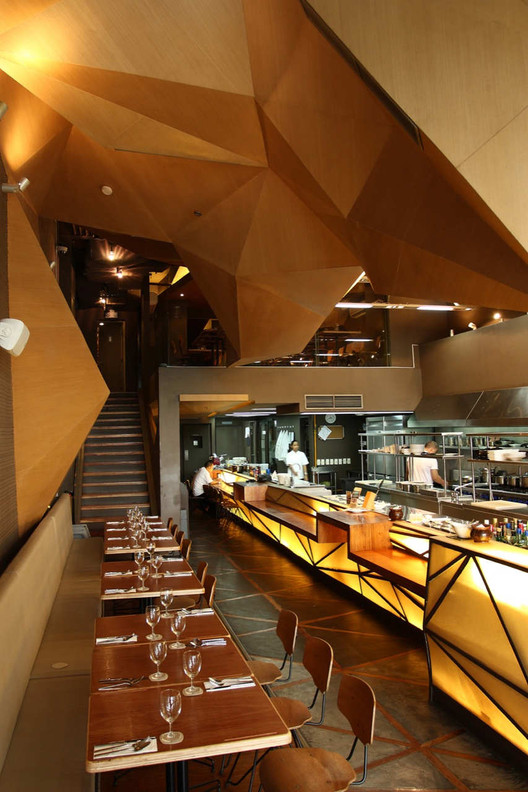 Text description provided by the architects. Chef’s Table is a contemporary restaurant owned by celebrity Chef Bruce Lim, a well celebrated chef who hosts world-renowned tv cooking shows and consults for numerous food companies. His cuisine is essentially contemporary Filipino. He takes local dishes, ingredients, and recipies and gives them a surprising but pleasing twist.

The first design response was naturally to capitalize the persona of Bruce as a celebrity, giving focus to him within the space. The second was to reflect a re-packaged and a modern Filipino aesthetic in the restaurant, a strategy that matches his philosophy in cooking.

The core idea is that of weaving. This act of intertwining was chosen because of its ubiquity in the Filipino culture as can be seen in different aspects of life – banigs, salakot, salakab, barong tagalog, vintas, and even the native bahag, just to name a few. This idea manifested in different levels of the design – in space, in views, in form, and in materials.

Weaving Spaces
Typically, a kitchen is considered to be a “back-of-the-house” facility, one that is always hidden behind closed walls or is pushed back to the most inconspicuous part of a restaurant. In the case of this project, the kitchen is designed as an open one and is the first thing that is seen upon entry as it was pushed to be right in the center of the space. In the middle of the kitchen and consequently the whole restaurant is the chef, the genius behind the sumptuous gastronomy.

Weaving Views
The existing space had a mezzanine, which posed a challenge as to how to make the chef on the ground below visible from the deep portions of the upper level. This was answered through the use of a massive triangulated drop ceiling juts down from the slab and is where a giant reflective surface was applied, making the chef and the rest of the kitchen visible from above.

Weaving Forms
Wood veneered strips grow out from the walls and rise above the entire space and converge above the kitchen as a hovering mass, effectively weaving surfaces into one continuous triangulated form, echoing weaving patterns in Filipino culture. This also leads the visitors’ gaze towards the highlight of the space, the kitchen, as the faceted form points towards it, ending with a beam of light on its edge, as if the different materials and forms found within the space are fused together and merged to become something intangible. 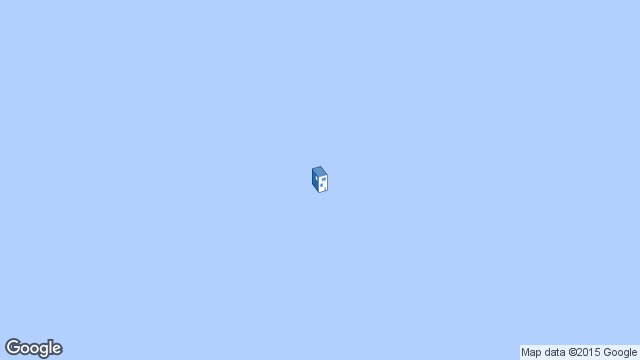 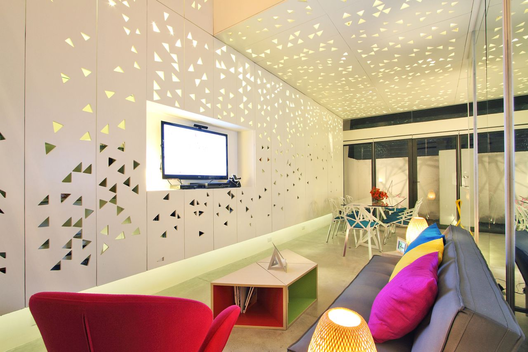