In late 2008 the City of Punta Umbria, located on the coast of Huelva, Spain, organized a Competition for a Congress, Exhibition and Fairs building. MRDP Arquitectos sent us the winning entry. 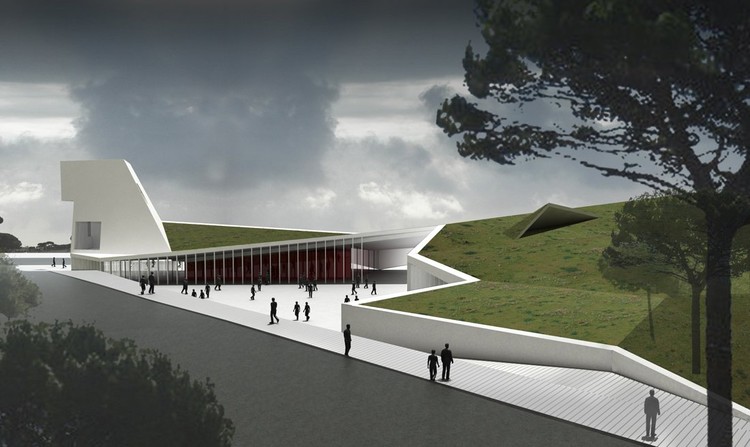 We intend to create a building to distinguish the City of Punta Umbria from others of similar size in the environment that contain similar facilities for fairs, exhibits, congress and shows.

The project is organized around two main ideas:

From a programmatic point of view, we believe that Fairs and Exhibitions Pavilions samples becomes an inert, almost residual, in the hours and periods without activities. Therefore, we articulate the project around a plaza as a stimulus and an urban object, which may give the area more life regardless of the timing of the activities it contains.

Moreover, from a formal point of view we generate a unlimited flexible topography, where any changes did not compromise the character of the proposal. A building that moves away from conventional forms of fairs and exhibitions containers, flexible with itself and the area to be implanted, confused at times with it.

The new topography will contain the required activities under a green roof. The excess cost of such roof will be offset by savings in the acclimation of these large-scale spaces with an enormous thermal inertia.

The green roof will be covered by native hydrophilic species, resistant to weather and with poor maintenance. Part of the roof will be occupied by pedestrian paths connecting archaeological items that are expected to be found at the site.

We provide the building with a whimsical and unique 17m tower, as a lighthouse that will allow a visual connection to the river and its surroundings next to the building. This tower will contain small conferences and V.I.P rooms.

The Architects sent us a KMZ file, so you can see the project on Google Earth.