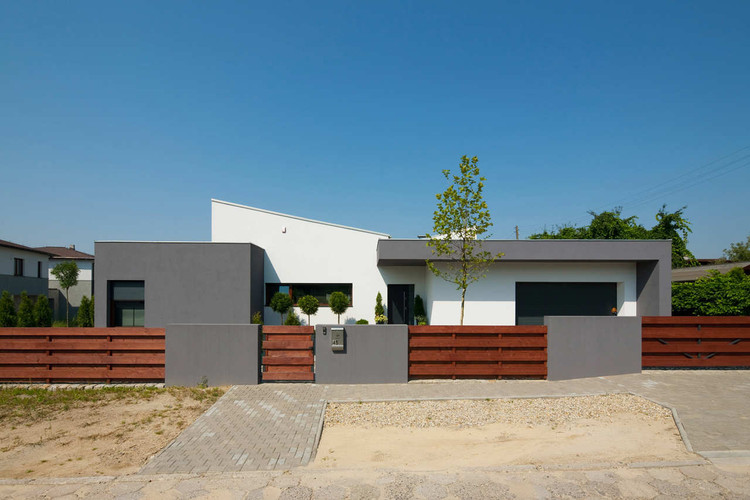 The house is located in the district of detached houses, among the chaotic and varied building which is a typical for the majority of contemporary Polish suburbs.

The client's request was a bungalow – the utility program has a living area a private night area and separated space which serves as a cabinet and a spare room. In the future it can be a room for senior.

The problem was connected with the neighborhood houses which have a look-in the site. The Investor has wanted to have a not introverted house with opening towards the garden.

The solution was to create the principal terrace which is lee from three sides. In this way it became an intimate space for spending free time with friends during warm months.

The house's composition consist of the ground floor area and the two small sections which are situated above it. The pieces are covered by penthouse roofs which have opposite inclinations. In one of them there is a little loft and the another one is a top part of the living room.

Of the south-western site in the future there will be the shallow pond being complement of the terraces and pergolas composition.

Entering the building we occur in the center of the living area, between the living room and the kitchen (with view of the site's entrance) and the dining room. All of the rooms are opened on the above-mentioned terrace. Behind the living room there is an inhabitant's private area with bedrooms and bathrooms. Behind the kitchen there is an area for guests with a separated bathroom. A division of the space in this way gives an option for making a flat for old person with an individual enter. On the north side there is a garage for two cars and a technical rooms.

The solutions were good decision and the terrace truly became a real heart of the home, very often used by residents. 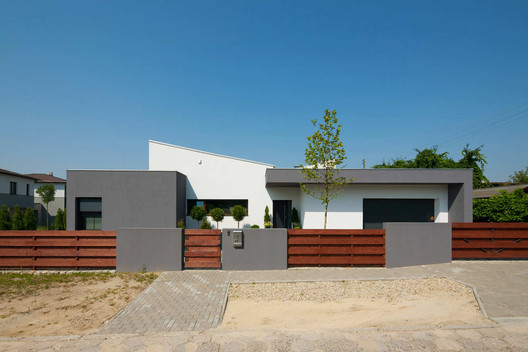