Text description provided by the architects. Mercabarna has opened the new building for the flower market Mercabarna-Flor, an innovative market for flower, plant and accessory wholesalers. The market aims to become one of the principal markets in Catalonia and the rest of Spain, and a reference for facilities on European level.

The project of the market maintains in its exterior façade the archetypical image of traditional markets, in which the roof turns into the real protagonist, like an icon of public architecture. The roof of the new market consists of a combination of folds between the floor, the wall and the roof, dissolving those elements to create entrances, loading zones or protected areas around the entire perimeter of the building. Its analogy with a shell gives the building an organic character that is associated with the activity and movement that is happening on the inside.

While the roof is the big integrating element of this market, in the interior three conceptually different markets are located each of them with its own specific characteristics and logistic and technical conditions, according to the product on sale.

One part is meant for the Cut Flower Market, with modern industrial cooling systems, where the temperatures can be maintained between 2˚C and 15˚C, since the product has a fast turn over with a selling time of only three days.

On the other end of the complex the Plant Market is located, designed with heating systems with a radiant industrial floor, one of the biggest in Europe with 4000m². It has passive cooling systems that introduce humidity, which guarantee that the temperatures will never be below 15˚C, or above 26˚C, especially designed for the needs of this product that requires more selling time, about 15 days. This means that besides being a vending zone, this sector is also a storage zone or greenhouse during this period of time.

Finally in the middle of these two opposite sector the Accessory Market is located, an especially delicate sector, because of its elevated fire risk, due to fact that they work with dried flowers and that the sale requests a considerable storage area. This subsector has especially been designed to detect and extinguish fires, based on the experience that in a traumatic way forms part of the history of the Market, which caught fire and was destructed in the year 2001.

The complex also includes 500 parking spaces, a loading zone, a gastronomic restaurant, which has the capacity to turn into a reference amongst the offer on the highway of Castelldefels, an office zone and two florist education centers and in addition a multipurpose space for events.

From the point of view of location this building is framed within a series of singular operations with a marking architectonic character, which are being carried out between Plaza España and the new terminal of the Airport, like the works for the Fira de Barcelona (Fair of Barcelona) by Toyo Ito, The Hesperia Tower by Richard Rogers or the new international terminal by Ricardo Bofill.

The building claims to transmit an iconic value that is marking its public use. A skin has been designed that besides its formal language and its special character based on folds, expresses several characteristics of identity related to the activities of this sector. Following this concept, the big zinc roof that covers the whole market is designed with parallel linear geometries with different tones in a nonsymmetrical way, imitating the aerial view of the cultivated flower fields, marked by a big frame with a multitude of colors that descends and rises to organize entrances along the building, a distinct movement and graphic image that is in line with this Flower Market. 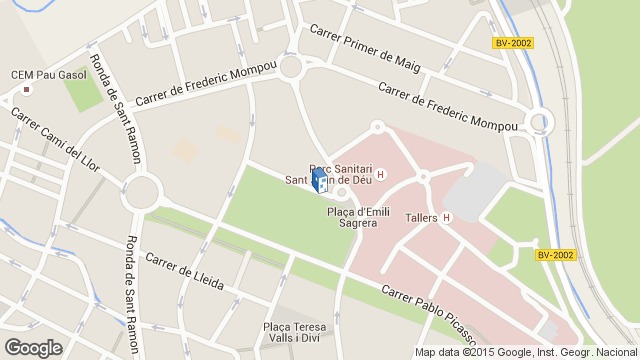