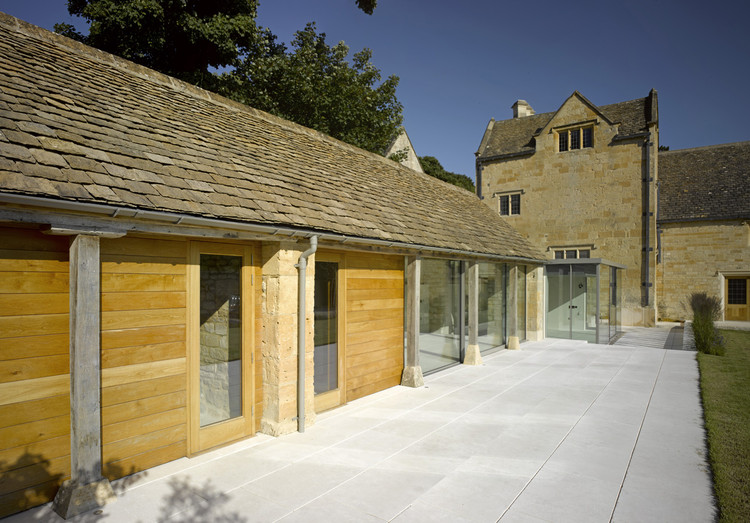 Text description provided by the architects. London-based practice De Matos Ryan has renovated and extended a Grade listed country house estate in Gloucesteshire, Home Farm, bringing it up to date for 21st century living. This design won both the BD Architect of the Year Awards One Off House Architect of the Year and the Roses Design Awards 2011 (Silver) for Re-use of a listed Building.

Home Farm comprises a Grade II listed eight gabled main house and two outbuildings, set in a landscape neighbouring a Grade I listed Church in the Cotswolds. De Matos Ryan have remodeled the main house and added a contemporary garden pavilion which functions as a link building, consolidating the estate whilst housing a new open-plan kitchen and living room.

The house dates from the 16th Century and was extended in the 17th Century. Having suffered considerable neglect over many years it required a complete refurbishment. It has been restructured internally allowing provision of an additional bedroom and bathroom in the loft space, extending the number of bedrooms from 3 to 4.

The periodic addition of a new detached or infill structure to the site is fundamental to the character of the listed enclosure and expresses the adaptation of the site to the changing needs of its occupants and local community.

Key to unlocking the potential of this house is a new low-level garden pavilion, cut into the sloping hillside with a glazed link to a converted open barn shelter and a hidden ‘underground’ link to the main house. The carefully designed winged roof of the pavilion maintains visibility of the two characteristic large primary stone walls on the site, that of the side of the house and the rear retaining wall to the upper level churchyard.

To the west of the house is an open barn/out building shelter which has been converted and refurbishment to provide ancillary guest bedroom suite to the house and a garden room facing a new structured garden.

To the South of the site is a further stone structure, previously used as a garage shelter, which has been extended to the East & North to provide an upper level home office studio and a lower level concealed garage with a planted roof for 7 cars.

Natural local materials of the highest quality have been chosen to match the existing setting. The natural limestone and oak will weather and age to ensure the integration of this with the adjacent structures and landscape quality of the site.