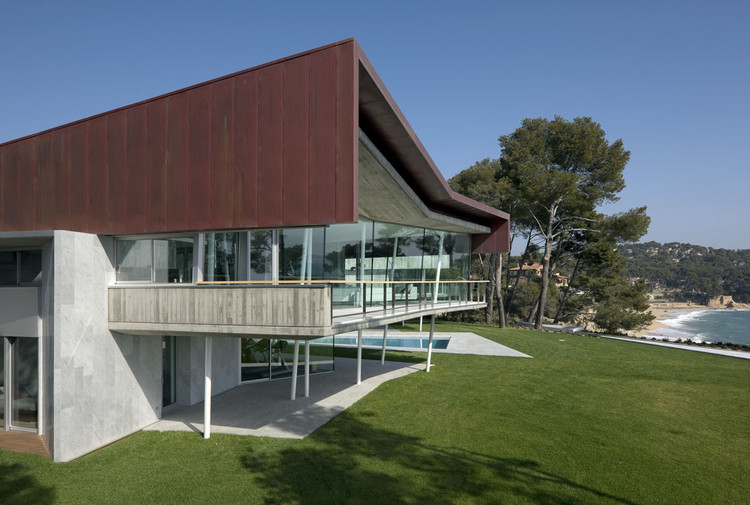 Text description provided by the architects. On a plot of 1.8 hectares oriented to the north and east with good views over the sea, the plan is for a building of 1,600 m2 with a programme for a family of five, with complementary spaces for guests and servants.

The house is situated in the lower part of the plot to facilitate proximity to the beach and separate it from the access street and the neighbours’ sight. Two wings with copper roofs connect at the central point, where the entrance and the stairway to the lower floor are located.

The irregular shape of the floor plan is generated by the internal routes foreseen in the programme and an optimal exploitation of the good views. With the location in the lower part of the plot, the roof of the building becomes a fifth façade of the house, and perhaps the most significant, being visible from the moment of passing through the entrance gate to the garden. The overall geometry gives the house a “topographical” condition in continuity with the rest of the large existing garden.

All the day rooms have views of the sea. This priority makes it necessary to place the windows of the bedrooms facing north. Consequently, a south-facing skylight is constructed to provide a second entry of daylight into them. The master bedroom forms a body located in the part closest to the beach and isolated from the rest of the house.

The zone with the best orientation is reserved for the living room and main dining room. It is accessed by walking around an inner courtyard-pool, which isolates the central space of the living room between two opposed sheets of water: the artificial pool and the natural surface of the sea. This space is generously glazed, looking out onto the magnificent surrounding countryside.

The lower floor contains the ancillary spaces: offices, gymnasium, saunas, wine cellar, guests’ and servants’ rooms. The swimming pool, located in the centre of the house, penetrates into its interior beside the ground-floor living room. Two exterior porches project out from the house: one connected with a summer kitchen and the other as a prolongation of the gymnasium and the guest room.

Initially the exterior of the ground floor was planned to have a drystone wall finish, in continuity with the neighbouring walls of the shore walk, with the first floor having white concrete façades and a zinc roof. But later, on seeing the first concrete walls built, the owners suggested the possibility of maintaining that finish, so it was opted to change the original concept, finally leaving the lower façade with grey granite stone panels, the upper façade with wood-shuttered concrete (like the interior walls) and a roof of copper plate.

The support system of the large volumes of the building, originally conceived with overhanging beams, was solved with a system of cylindrical steel struts of 16cm diameter. Their slimness and arbitrary inclinations relate them formally with the surrounding pinewood and help to give visual weight to the wings of the bedrooms and the living/dining room.