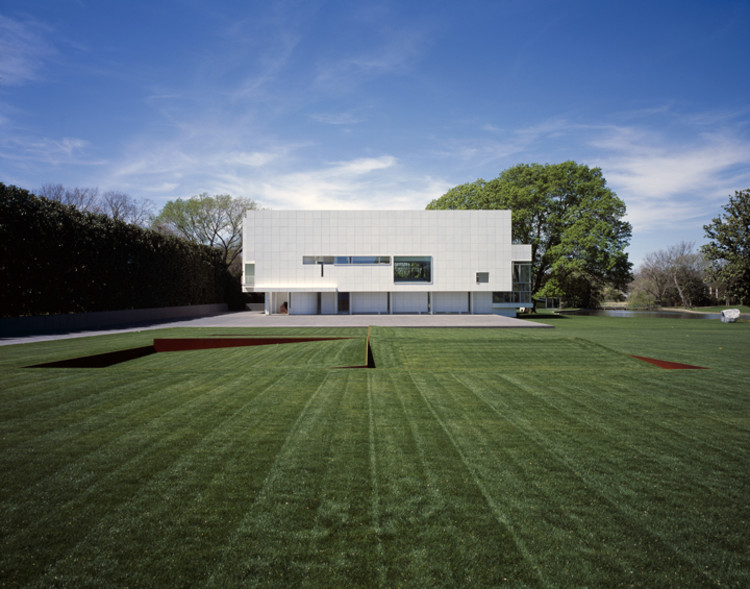 Text description provided by the architects. The most satisfying part of the Rachofsky House is that it is not a museum. There is no real reason why it shouldn’t be, considering the multitude of visitors and school fieldtrips that frequent the 11,000 square-foot, three-story building week in and week out. But the House remains a 100% private residence, still owned by Mr. Rachofsky and operated by a small staff. This all lends to a very unique and personal experience for the visitor, because not only does the intimacy of a house enrich one’s interaction with the art, but the lessened formal pressure allows for greater exploration of space and more appreciation to the architectural detail.

Howard Rachofsky is a native of Dallas, Texas who rose to significance through his trading on the stock market. By the mid 1980’s, he was widely considered one of the most prominent men on wall street, while still working out of a small office in Dallas. He first approached Richard Meier about designing a home for him after falling in love with his High museum in Atlanta, Georgia. The original Rachofsky house was designed but never realized as much larger project on an area of land close to where the actual Rachofsky house sits now.

After completion in 1996, Mr. Rachofsky lived there for only a few years before getting married and moving into a different house in the area (designed by Dallas legend Lionel Morrison) that was more suitable for family life. As one could imagine, the viability of a three-story, one bedroom bachelor pad/art gallery is lost in the addition of a wife and children.

The house is centrally located on 3.2 acres of land, allowing for a grand approach up the driveway to the elevated podium on which the house rests, in addition to a rich backyard containing a pool and various site-specific sculptures to discover beyond. At any given time the house is displaying scores of pieces from Mr. Rachofsky’s vast 700+ piece collection of important, contemporary artwork.

The basic programmatic layout revolves around 3 rows of columns and an X-Y axis of circulation. The front and back entries are on axis with interior/exterior circulation, while the different stair sets are on axis with vertical, interior circulation. Furthermore, the column rows divide the house functions and delineate between more public circulation and private spaces. The southern end of the home utilizes a private spiral stair case that allows direct access to the master suite.  Along with the bedroom and enormous his-and-hers master bathroom, the third floor also hosts a gym, two balconies, and an office that "floats" above the living room like a box within a box.

A large, rectangular Eastern façade seemingly floats above the entry on the front of the house. The ubiquitous Meier grid of white aluminum paneling covers the exterior, but pales in comparison to the amount of glazing found on the rear facade once inside the main living area. It is interesting to note that mullions and openings on the house do not line up with the exterior grid of the façade, but instead align with walls and columns inside the house which are based off of the 3-foot podium grid.  The cantilevered stair to the North becomes a show-stealing moment of transition between ground level and raised living area, completely enveloped in glazing that leaves one floating between interior circulation and the overwhelming view created by the massive trees and lake outside.