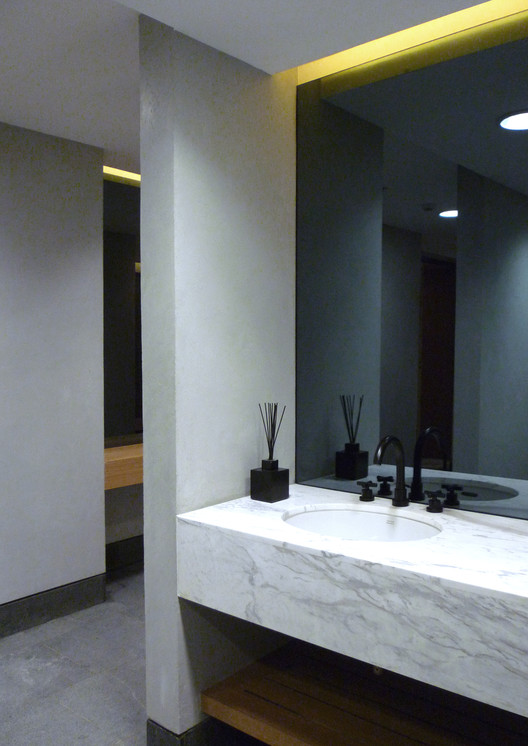 Dubai based Architects, Godwin Austen Johnson have recently completed this boutique health club for clients uconcept in the heart of the Emirates financial district, DIFC. Previously two retail-units, the project is located on the podium level of the Gate Village development completed by Hopkins Architects and GAJ in 2008.

The concept of the health club was influenced by a series of black and white photographs taken of an old NY gymnasium. “The figures appear in silhouette and their true physical form is expressed against the backdrop of a stripped out warehouse” explains Project Architect, Jonathan Ashmore. We wanted to express this honesty of mechanical form and function in the project, through a selected exposure of the new structure contrasted with the existing columns and surfaces of the original building. It is not very often that you have this opportunity to contrast old with new (albeit only relatively) in Dubai, as everything is so recent. With uenergy, we had this opportunity and it felt important and appropriate to both preserve and inlay new layers into the buildings fabric.

GAJ focused on the attention to detail and material in uenergy to bring together raw industrial textures of a New York warehouse with the finesse and execution of a luxury hotel.

The main challenge was to create the health club within a prominent retail space of three fully-glazed elevations. On paper, this was not the best suited space for a Health club; in full view of passersby, particularly in a conservative region like the Middle-East. This posed an issue of privacy and a crucial design challenge.

The designation of functions and client requirements meant that the layout of the project had to work very hard. We looked at the concept as a series of volumes rather than two-dimensional areas. We proposed a new mezzanine floor which increased the overall floor area from 560 to 650sqm across three levels and allowed us to accommodate all the facilities. (Images 15-29)

The design explored the connecting volumes to create thresholds of horizontal and vertical surfaces to filter natural daylight and views deep into the heart of the project. The circulation route into the gymnasium was directed around the perimeter to practically serve as a buffer between the public and private areas. (Images 1, 8, 18 & 19)

This also created a dynamic relationship between people passing in parallel both inside and outside of the façade. The main-corridor privacy screen constructed of tinted-mirror, Parklex (#4) timber blades and light-boxes, created linear apertures that controlled selected views and daylight to penetrate the internal space. (Images )

The parallel tinted-mirrors reflect those walking by on the outside. ”You can often see people stopping outside to contemplate whether they just glimpsed themselves, or a silhouette of someone else moving in the opposite direction” JA. Like the effect of passing by an alley-way and wondering if it was your reflection or another person at the opposite end. The idea is to ‘contemplate’ for a paused moment and reflect on yourself and your relationship with your immediate environment. For us, this was the essence of the u-energy project and we wanted the design to also represent the clients’ brand. (Image 12, 13, 14)

Through the design of each surface, we played with the materials and details to control the light and visual levels. Each internal elevation encourages the user to reflect upon themselves and their presence within the health club and the wider context. This was achieved using mirrors in the gym areas and a facade of offset glazed panels, horizontal Parklex blades and light boxes that filter the views beyond. (Images and 9 & 10)

We believe the overall final product is a result of understanding the context, function and aesthetic which in turn represents an architecture that has considered all three with equal measure.