In the Spring of 2011, the Design|Build studio at the Maryland Institute College of Art (MICA) began researching the various influences impacting the design and construction of transitional shelters used in disaster relief. The research included a review of conditions in Haiti, where a portion of the class travelled to Port-Au-Prince over their Spring Break to check out some of the shelter types being constructed in response to the earthquake that devastated the area back in January of 2010.

Several case studies were investigated, including the Haiti Earthquake. The research was comprehensive. However, the impact of this survey on the outcome of transitional shelter was debatable – there were no “universal solutions”, and there was no panacea that could solve every scenario. 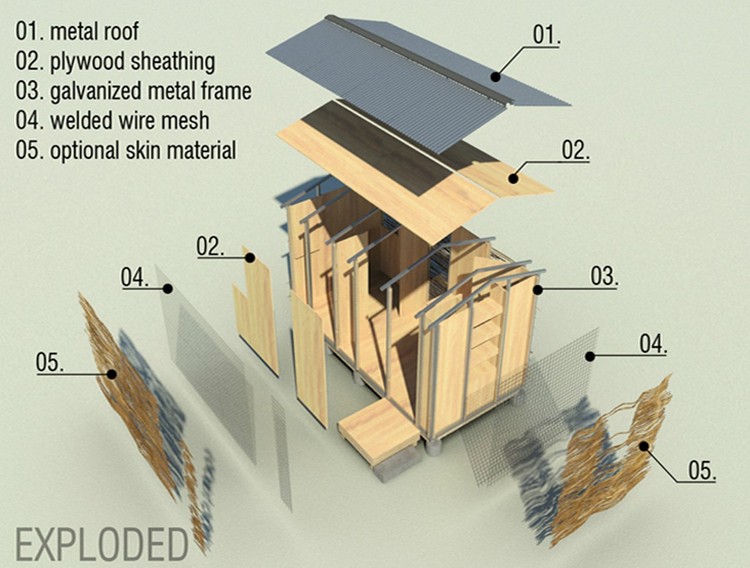 As the class moved into design, several realizations came to the forefront – principally that shelters would need to adapt to specific environments, specific cultures and specific climates. The ability of a shelter to accept alternative outcomes would be critical to expanding its usefulness… and a shelter that could anticipate a cultural dialogue, offering the possibility of tenant interaction, could establish one form of ownership for the shelter, strengthening the appeal, and providing a sense of dignity and pride for what is typically a pre-designed offering.

We would assess circumstances of a culture, both before and after an event, in order to gain a better understanding of what kind of shelter would be most suitable. This research could be implemented into a simple design framework that could accept different circumstances – what type of climate is it? Would the shelter need to be insulated? Could we take advantage of passive cooling strategies? How much rainfall? How much wind exposure? What type of materials would be available in the area? What would need to be imported?

The goal became to localize as much of the productive capacity of the shelter as we could – keeping in mind safety and welfare, but allowing for the shelter itself to become a part of the culture in transition, and eventually a permanent fixture in the local community.

We began to simplify the concept relating it to the human body… Structurally, human beings are similar in their make-up. Where we differ is in the maintenance of the bodies we are given – the languages we learn, the foods we eat, the clothes we wear. The metaphor we became attached to was that we would develop a solid core of bones, but the outward appearance could change.

So, in design our principal concern became the development of a sound structural framework that could accept different skins.

We designed a shelter that using a 2” lightweight galvanized frame. This frame is pre-engineered, and with some structural sheathing will withstand aftershocks and intense winds. The metal frame is set up on a series of pallets that make up the floor. The pallets can be used in shipping the components of the shelter and aid items, books, or clothing. The sheathing goes on the interior of the frame, simplifying the wall construction. The exterior of the frame supports a welded wire mesh that could be used for weaving any of various skins that could be culturally significant, or could be recycled debris from the disaster. The double wall here naturally forms a ventilated air cavity to reduce the heat impacts of the sun that also acts as a rain screen.

A gill system on the interior – essentially hinged panels – allows for controlled interior conditions and passive air movement. And a plywood sheathing substrate to a corrugated metal roof offset with rubber spacers will help insulate the sound of rain hitting the roof during bad weather. A simple ridge vent atop the roof helps ventilate the warm, stale air from the interior. Several other hinged components form fold-away table surfaces and shelving.

Our experience in Haiti made us realize that a pre-packaged shelter, constructed in 12 hours, supplies much needed shelter in quick fashion. But it does little to support the local economy, or the needs of the displaced citizens who consistently find themselves looking for something to do.

What we like about our system is that it could still be quickly constructed – a roof could be set up overhead in merely two days time if the system was prototyped. But with the need to skin the building given back to the local circumstance, there is a possibility for a burgeoning economy to help with the period of transition. A series of occupations could be developed that collect and prepare materials. And a series of jobs could be established for skilled “weavers” that use the materials to fashion building skins. What typically takes 2 days to construct now takes two weeks to complete, providing stimulus to the local economy, resourcing local materials.

That is why the community design concepts are ultimately as important as the design of the shelter itself – the ability to realize cultures in transition, how they change, and how they adapt is critical to providing a solution for transitional shelter that can evolve with the circumstance. We could have proposed solar panels, but transitional shelters typically have little need for power. A simple battery station for cell phones can be provided. We could easily add a water collection system and filtration tank, but aid organizations usually are quick to establish access to clean water tanks that can be serviced by water delivery trucks. A small tank for hand and feet washing would do the trick. We used the lessons we learned from post-disaster conditions in Haiti – design within reach with recognition of the services already provided. This makes for a much simpler, and more durable finished product.

A price point has to be met in order to make the shelter competitive with the current model. Adding intensive technologies or systems that can be provided by other organizations inflates much of the material cost. Initial estimates for our prototype are coming in at about $2700 (US) dollars for materials. Should the prototype be mass-produced, our price point could be lowered to a more competitive $2000 (US) dollar range.

Our group is in the process of constructing the prototype, which we hope to complete in the next few weeks. Since we began our research, new disasters have taken place. By mid-year 2011, some 355 disasters of various scales had occurred over the globe, and it is anticipated that this will be the costliest year of record to deal with the aftermath. Japan had an earthquake and tsunami in March; New Zealand had two significant earthquakes this year; landslides and flashfloods in Brazil; and the United States has had several severe storms and floodwater events that will cost the government billions of dollars in recovery funding.

What can a shelter do, beyond the simplicity of providing a roof, to help people recover… to help a region rebuild? We think this design is a start to constructing a larger dialogue about this issue. It does not intend to be the ideal design for the universal condition – it simply provides a framework for transitional growth.