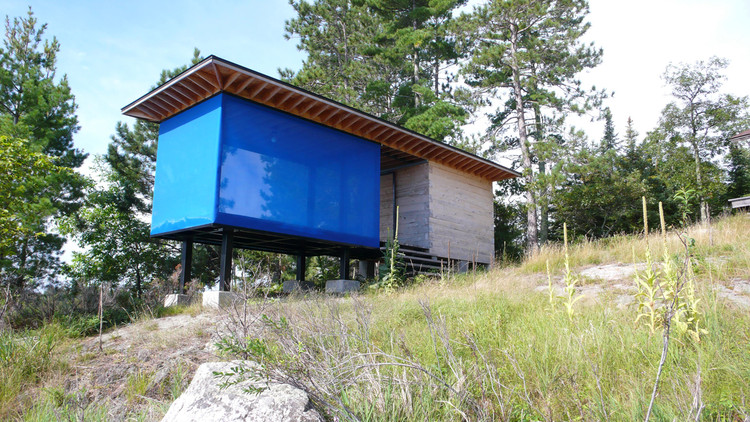 Text description provided by the architects. The Island

The “Blue Cube” is located on Grindstone Island, one of many islands which dot the watery landscape of Rainy Lake in Northern Minnesota. The particular peninsula of the island that the building was imagined for is geologically composed of some of the oldest granite basement rock in the world averaging between one and three billion years old. With the US Canadian border immediately to the North and Voyageurs National Park immediately to the East of the buildings site, the area is a rare and special place for both locals and visitors alike who use the grand northern boreal forest for fishing, nature study, and forays into the wild.

In the 18th and 19th Centuries Rainy Lake was home to the Ojibwa tribe of Native Americans and the waters were plied by French Canadian Voyageurs traveling what was then known as the Laurentian Route which follows the Laurentian Divide where all waters north of the divide flow North into Hudson Bay. At the turn of the 19th century industry developed in the area in the form of paper manufacturing supported by logging for pulp acquisition which are still the two primary economic drivers for the area today. European immigrants moved to the area for work bringing skilled craftsmanship and knowledge of massive timber construction. In 1975 Voyageurs National Park was established to protect 114,000 acres bringing more attention to the areas natural beauty and cultural history.

In the early 1980’s the designer’s father, the sculptor Rolf Westphal began utilizing paper machine clothing as an element in large scale public indoor and outdoor installations in Scandinavia and the United states. Around the same time he began using the material as an integral element in a summer home he designed and constructed. The material was subsequently chosen for the Blue Cube because of its proven durability and UV resistance and for its unique and beautiful interaction with light.

The building was conceived of to be versatile in its function, culturally rooted in the areas history, and sensitive to the landscape. Comprised of two elements separated by a wooden bridge, each element offers different atmospheres for sleeping, eating, and reflection in addition to providing storage for seasonal visits to the island. The southern element is constructed from steel from the Minnesota iron range and blue paper machine clothing comprised of machine woven strands of Kynar 412. This is the first time the paper machine clothing has been used in an architectural capacity. It is predicted that the material will become more prevalent in the design of more high tech buildings and high-rise façade assemblies in the future. The woven Kynar thermoplastic which is 100% recyclable elegantly registers, spreads, morays, and splits daylight and artificial light in a multitude of ways through-out the passage of the days and seasons. In the summer months the screened in space protects dwellers from mosquitos and heavy wind. The blue cubes comparatively heavy counterpart to the north is built using massive timber construction methods from solid northern white cedar. The wooden cube offers shelter from storms and insulates against arctic wind traveling down from Hudson’s Bay in the winter and fall months. 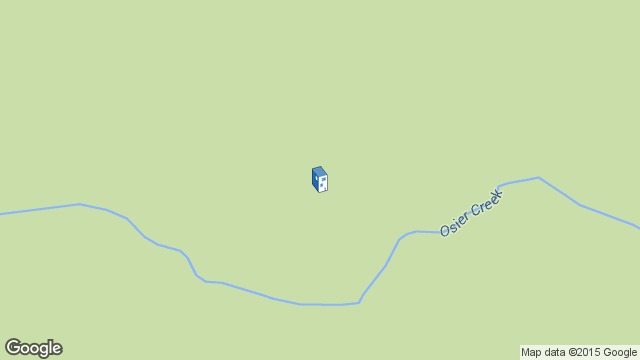