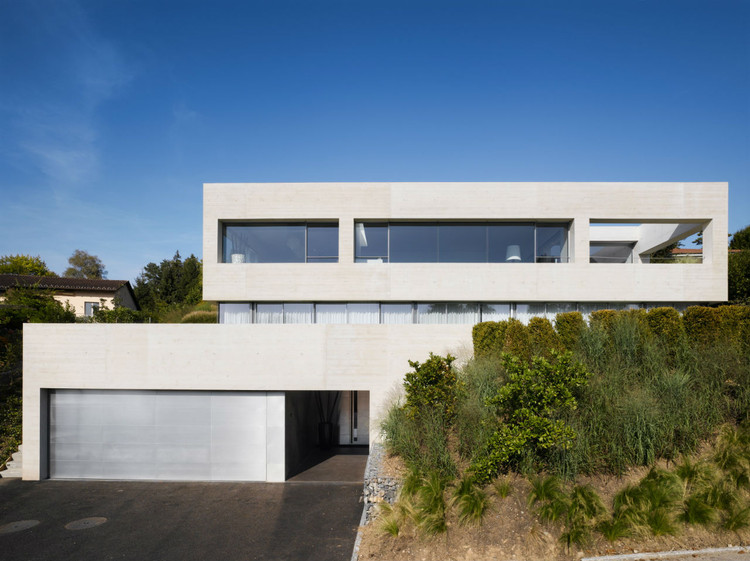 Text description provided by the architects. Building a house is a kind of apprentice piece for every architect. Yet the deeper you become involved in this type of commission, the more you realise that it is not as simple as it might seem. Every building is a challenge, no matter how many times you may have done something similar before. With this building there was much that was different: the plot already had a house on it, but the development density was less than that which is now permitted. The clients were clear about what they wanted in terms of space, and also were open to suggestions that could influence their lifestyle.

The slopes above the old centre of the village of Küsnacht receive a good deal of sun and enjoy extensive views across Lake Zürich and the Alps beyond. In the 1940s modest houses with driveways were built up the hillside. Low walls topped with hedges line the roads. The new buildings that are now replacing these old houses have to fit into narrow plots and strike a balance between affording a view of the surrounding landscape and preserving privacy from close neighbours.

The house in question here – for a family with two children – stands in the centre of the plot, on a plateau which was already used for the small house that had stood here previously. The clients wanted to have as far-reaching views as possible from the living areas, a request that led to the (for this area) unusual solution of having the living room, terrace and kitchen on the top floor. Three large panorama openings afford a view across the lake, over the hedges and past the trees in the neighbouring gardens; privacy and shelter is provided by the parapets and lintels, and on the solid-concrete side and rear walls by keeping the windows small.

The ground floor, by contrast, is entirely open and transparent. Enveloped in storey-high glazing, the bedrooms and of- fice spaces are visually extended out into the garden. Anyone standing on the lawn or gravel areas can immediately grasp the layout of the interior; under the protective solidity of the upper storey, the outer space seems to flow right through the ground floor. This design device has the effect of making the plot feel larger than it is; seclusion from the neighbouring houses is still maintained by planting hedges along the plot borders.

The house is simple and compact in volume, and has sym- metrical window openings. The upper structure of the house, cast in limestone concrete and resting on the internal walls of the ground floor, exploits the sloping site and opens up lines of sight between the outside and the inside. Throughout the house views and daylighting solutions are an ever present feature. In the side wall of the outdoor swimming pool, for example, there are two windows, through which daylight can filter into the fitness room in the basement.

The building process required the concrete to be poured in successive stages to achieve an overall visual unity, with no joints. For the formwork for the fair-faced concrete façades sawn boards were used, such as were common before the advent of panel systems. The texture left by this horizontal boarding gives the house a robust air, referencing also the older houses nearby. 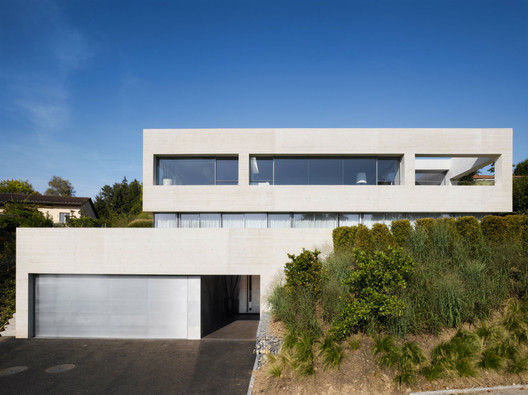