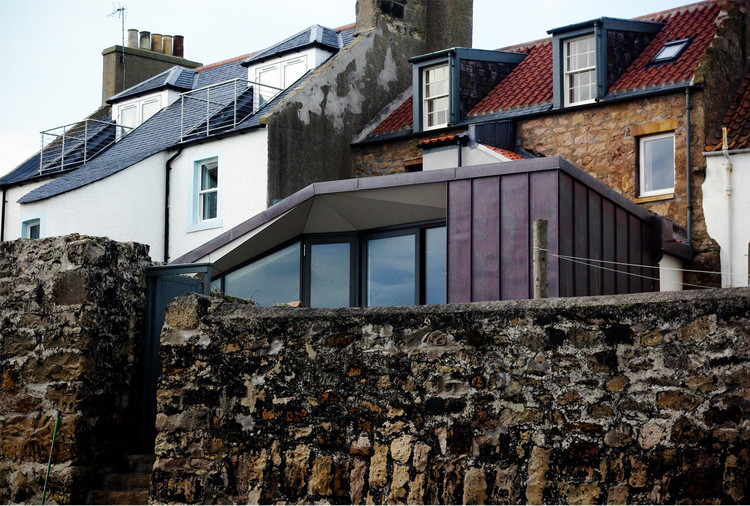 Oliver Chapman Architects were commissioned to design an extension to an early 19th Century fishing cottage over looking the sea within the historic town of Anstruther, Fife.

Typically dwellings in such settlements turned their back on the sea and grouped closely together to shelter the narrow streets behind from the elements.

Our strategy involved using a modest budget creatively to challenge opening and re-engaging existing living areas to face the sea, but retaining the character of the existing dwelling.

A 19th century stair to the rear forms the crux of the design, wrapped by a light glazed extension containing a new living room and kitchen but enmeshed to the existing by a wrapping timber surface which also forms a ‘cabin’ for study within the existing . A contrast in light and scale is experienced when moving through the existing dwelling, heightened by oblique views and unexpected glimpses of the sea.

The folded Oxidized copper roof form and irregular plan makes reference to the irregular geometry of the site formed by the relationship between historic cottages in the row and the angular rock of the ‘Skerrie’ which they are built upon. An angled glass roof-light provides a shard of natural light deep into the plan and visually separate the new extension from the house. Above a new roof deck connected to the existing stone stair allows the angular roof to be viewed in context of the dramatic views across the forth to the Isle of May.

Copper was chosen as an ‘active’ cladding to allowing the new form to patinate and adapt visually to its environment over time. This sits upon an angular plinth of Dark grey Caithness slate which anchors the floor plate to the rocky context. The walls, roof, floor and envelope are heavily insulated, providing a 30% improvement on current u-value standards which provides a significant energy saving thermal buffer to the existing dwelling. A sustainable surface water strategy results in water from the existing roof and ground surfaces, and the new angular roof being piped directly back into the sea. 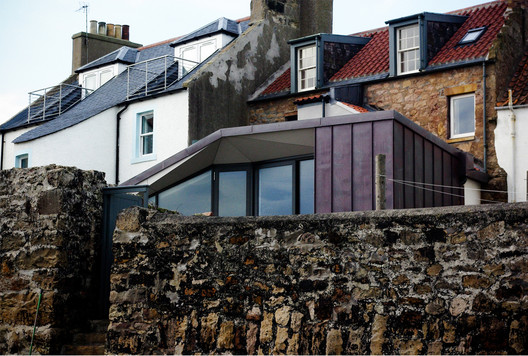