Tokyo-based architect Sou Fujimoto has been selected as the first prize winner for the Taiwan Tower International Competition. The winning proposal’s design reflects Sou Fujimoto’s philosophy of Primitive Future, as the “21st Century Oasis” aspires to be a model of green architecture for the future generations. 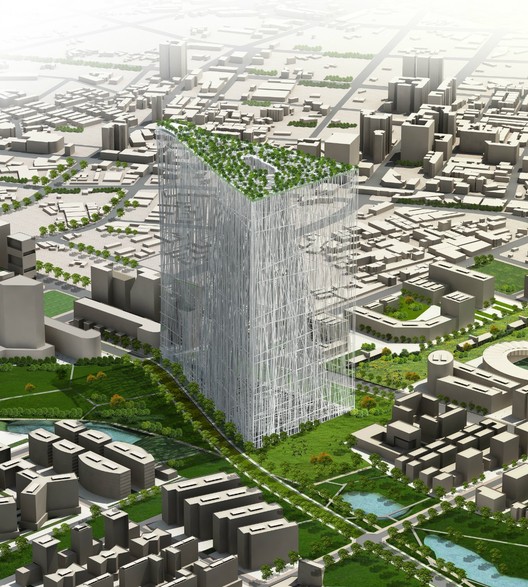 The Oasis strives to embody the 21st Century spirit of Taiwan, similar to the Eiffel Tower and 20th Century Paris. The tower gracefully rises above the city at the southern tip of Taichung Gateway Park, part of the former Taichung (Shuinan) Airport site.

Spiral Beams form two spiral-shaped braced planes, which extend from the ground to the roof between Perimeter Columns and Inner Columns. They are expected to prevent buckling. Each spiral plane rises about 30 meters near the ground, the point in which the axial forces of the columns are relatively high. The rise continues to gradually increase up to about 60 meters as it goes higher.

The light of the tower has “no obvious form”, as it represents an all natural phenomenon. The transparent, nonobjective feel is perceived as an “air-like light.” The roof-top garden is the three-dimensional continuation of the green-belt. The tower is meant to be graceful in nature and ever-changing, similar to the people of Taiwan.