Together with the local Natal organization Centro Sócio Pastoral Nossa Senhora da Conceiçao (Centro Sócio), Herzog & de Meuron released the design for a new gymnasium at the School of Dinarte Martiz. The gymnasium is the “pioneering architectural project” of a larger urban plan for the neighborhood of Mãe Luiza in Natal, Brazil. 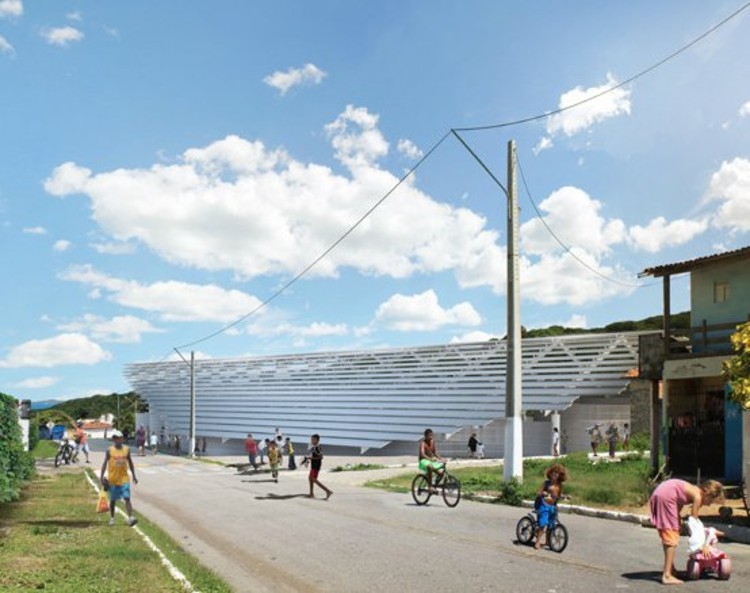 Nestled within a beautiful landscape of dunes overlooking the ocean, the neighborhood of Mãe Luiza is the result of a gradually urbanized informal settlement that has endured a tumultuous past. Precise interventions within the overall master plan provide for urban activities that are currently unaccomodated for and enhance the existing underdeveloped activities within Mãe Luiza. New facilities will be clustered together to form a new community center that aims to transform the perception of Mãe Luiza and satisfy the needs of the residents.

The project will begin with the existing concrete field framed by columns and trusses that are the remains of the “old gymnasium.” In order to maintain the personality of the neighborhood, the existing geometry is preserved. The geometry is then extruded over the building area while existing structural bays are kept then repeated, creating a grand roof that is adaptable to all desired activities. The design remains consistent with traditional approaches to large public spaces throughout the North East of Brazil while introducing a new urban scale to Mãe Luiza.

The naturally conditioned building is made up of three main elements – the grand roof, the continuous floor and the single undulating wall. All the elements are constructed with materials and techniques typical for the region.

Ion Andrade, Vice President of Centro Sócio, states in his press release that projects underlying idea is that the “development of low-income communities involves public and private investment in social infrastructure that can absorb the demand of youth in the areas of culture, sports, leisure and professionalization.” He believes the construction of the gymnasium assures a better future for the district of Mãe Luiza.