Save
In Progress: Marlins Ballpark / Populous
Share
Or
Copy 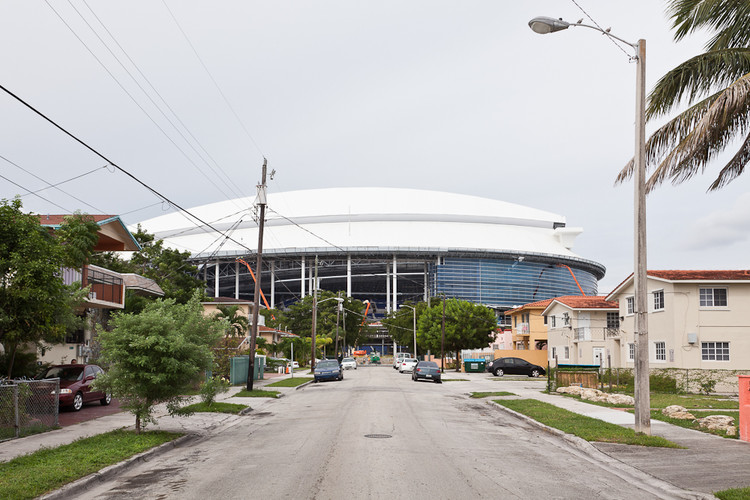 Marlins Ballpark will replace the legacy of the memorable Orange Bowl in Little Havana, adjacent to downtown Miami. Situated on the same footprint, the ballpark is intended to be the anchor for infill and redevelopment on the site. This new 37,000-seat MLB facility will include a retractable roof to shield spectators from the sun and rain, inherently changing the perception of summertime baseball in Florida for generations to come. The bold vision of the County of Miami-Dade, the City of Miami and the Marlins is portrayed through the architecture as a modern, kinetic sculpture of faceted metal and glass.

The urban plan proposes a fundamental change in the character of the old Orange Bowl precinct, recreating the neighborhood street network and reconnecting Little Havana to Northwest 7th Street and Northwest 17th Avenue. Within this framework of public streets, the ballpark, future development and parking garages are presented as urban buildings on city blocks, creating an urban center.

This plan proposes a civic setting for a civic building. Conceived as an urban gallery, the ballpark is located between major public plazas on the east and west boundaries of the site. Parking structures form the other two walls of the gallery, moderating the scale between the ballpark and adjoining neighborhoods. The western plaza is unlike any other place in Miami, changing as the roof is rolled over the park below. The ballpark will provide retail at its base to integrate with the proposed, adjacent retail development, intentionally creating a street edge that connects to the surrounding neighborhood.

The Ballpark as Sculpture

The building is conceived as an abstraction of water merging with land, symbolic of Miami’s coastal landscape. The base of the ballpark will create a backdrop for urban life with arcades and colorful mosaics reflecting the diverse culture of Miami. The arcades are capped by large sweeping balconies, allowing a continual pedestrian/spectator experience to the street life surrounding the ballpark. The east and west facades provide transparency to action both inside and outside of the ballpark, visually connecting and reducing the mass. The roof will become the kinetic element of the sculpture, moving as three separate panels to provide shade and weather protection for all spectators. The roof movements will be reflected in the use of color as a dynamic addition to the architecture. The seating bowl is comprised of three decks with fewer than 10,000 seats in the upper deck, resulting in one of the most intimate experiences in all of baseball. Interior features will include atrium spaces filled with color and art, a half-acre operable window to downtown Miami and beautiful colors bathing the concourses.

This ballpark will be a civic sculpture with a strong connection to one place, one neighborhood, one city and one state.