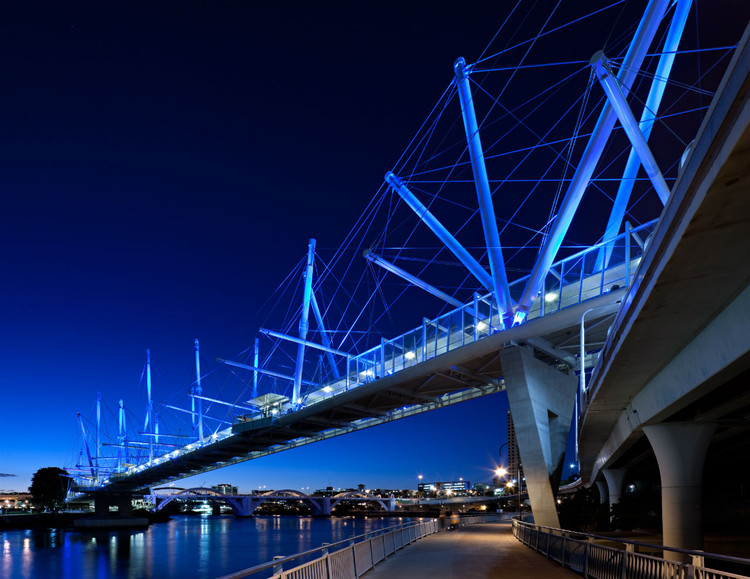 Text description provided by the architects. The Kurilpa Bridge project was an opportunity to not only make a new pedestrian and cycle connection across Brisbane’s river but also new forms of public space, as well as a symbol of a city forging its identity at the forefront of art, science and technology. Its origins as a physical link lay in our own late 1990s planning coinciding with the design of the Brisbane Magistrates Court, its value enhanced by the revitalisation of Queensland’s Cultural Precinct and the emerging city precincts in the northern CBD and South Brisbane. Its conceptualisation, based upon Buckminster Fuller’s principles of tensegrity, was to simultaneously resolve unusual physical challenges, such as navigational constraints and motorway spanning, and embrace the spirit of a city relaxed, subtropical city seeking to prioritise walking, cycling and healthy lifestyle. Equally, the design of the structure and its spaces is conceived to celebrate and engage with the river both viewed from its vantage points and viewed out from its primary and ancillary spaces. Lastly, on an international perspective, it is designed to embody and convey Brisbane’s emergence as a contemporary design city.

The underlying intent of the design of Kurilpa Bridge was to reinforce and embody the relaxed, informal intrinsic nature of Brisbane and its subtropical environment. Having explored each conventional bridge form during the major architectural competition (arch, tube, suspension and girder), we saw in the tensegrity typology a potential to enrich this city’s character and vitality, to celebrate its emerging design identity expressed in the adjoining cultural precinct, and to create public spatial diversity beyond those possible in standard bridge forms.

Kurilpa Bridge provides for Brisbane a significant pedestrian and cycle way that both connects its CBD and Cultural Precinct, and forms a completed loop of movement between South Bank and the CBD together with the Goodwill Bridge. Its design creates new spatial experiences for Brisbane and its visitors, both in itself and in appreciation of the river. For Brisbane’s indigenous people, it has important meaning as connecting across the place in the river where their ancestors travelled, this significance being expressed in stories, written by Jagera and Turrbal peoples, along the journey.

The form of Kurilpa Bridge evolved from analysis of other (more conventional) structures, which for the physical spanning and foundation conditions, all generated massive visual impacts on the context. The tensegrity typology was explored for its ability to enable design to predominate over engineering constraints, and refined to create interesting scale relationships with the Gallery of Modern Art, the South East Freeway and the CBD. This process involved wide design consultation with community organisations, the Gallery and indigenous representatives, the latter in particular regarding Kurilpa Park.

The Kurilpa Bridge design had to contend with several unusual challenges. Of these, the most formative was the position of the navigational channel preventing descent of the structure until it crossed the southern river bank. Only the tensegrity structure minimised the deck thickness sufficiently such that the ramp down did not consume Kurilpa Park, important as a city space and to Aboriginal people. The design also worked to meet the equally complex challenge of spanning the South East Freeway, and lastly it integrated the required continuous canopy within its system.

The collaboration between architects Cox Rayner and engineers Arup was equal and inseparable throughout the design process.

The Government budget was $63 million. The efficiency of the tensegrity structure enabled it to be developed under this budget, enabling the creation of the extensive viewing spaces, incorporation of multi-programmable lighting and invitation to the Jagera and Turrbal people to contribute the stories.

The very creation of this bridge has significant sustainability outcomes for the city especially promoting walking and cycling over vehicular travel. From a design perspective it is the world’s only solar-panelled pedestrian bridge, used to power the lighting.

Kurilpa Bridge has elicited many responses, the most compelling being patronage already exceeding original estimates. 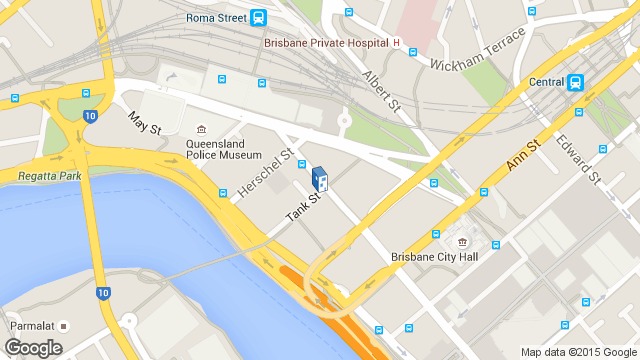 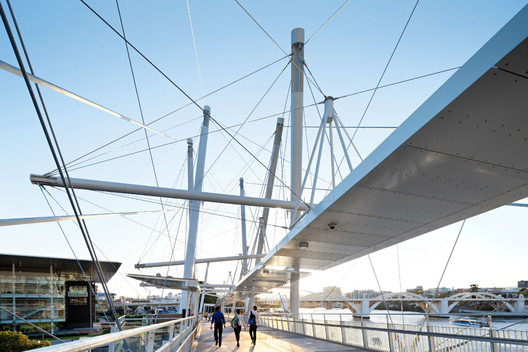