Text description provided by the architects. The schematic design stage for the Supreme Court Building explored many alternatives before a concept was selected for development. The initial approach was largely determined by the existence of three axes which intersect the site.

The first, is the north/south axis running along the ridge of the hill which connects the Central Bus Station, the Convention Center, the Hilton Hotel, the Parliament, and the Israel Museum. This axis, the most formal of the three, serves as the major public approach to the Government complex. The second, is a green east/west axis that connects Sacher Park, Wohl Rose Park and the Hebrew University's Givat Ram Campus. The third, is an emerging axis, already evident in the urban fabric, which extends between the old city and The National Precinct. It will eventually connect the Rockefeller museum to the Wohl Park, stringing together many important public spaces. Once this axis is formally articulated, it will strengthen not only the ties between the old and new parts of the City, but also those between its spiritual and secular institutions.

By incorporating these axes into the scheme, the building acts as a single, freestanding object in the landscape which relates both to its immediate environment and to the larger urban context. The building was intentionally positioned at their intersection in order to reinforce the relationship between the executive, legislative, and judicial branches of the Government and to create a public space common to all three.

The Supreme Court building is composed of four seemingly autonomous parts: the library, the courtrooms, the judges' chambers and the parking structure. They are separated by the north-south and east-west axes of superimposed and intersecting movement that extend throughout the building.

The transition from one section of the building to the next takes place through a grand and dynamic circulation pattern, starting at the entrance level and proceeding to the courtrooms above. This movement is perceived to be a fragment of a longer route in which architectural space mediates between the time and language of today and that of the past. Thus, the procession within the building becomes part of a greater process, whereby the simple order of the structure is experienced as intricate and complex.

The stone facades are not uniform. They carefully preserve memories of historic Jerusalem, a miniature city enclosed by a wall. And yet, they uncover a new and different reality of a more liberated geometry articulated in white plaster planes.

In distancing itself from the stone face of the external wall, light wells of different shapes and sizes are dispersed throughout the building. These voids transform raw light into human light, allowing it to be reflected in a palate of shades. The sequence of movement is followed and enhanced by a sequence of light patterns. 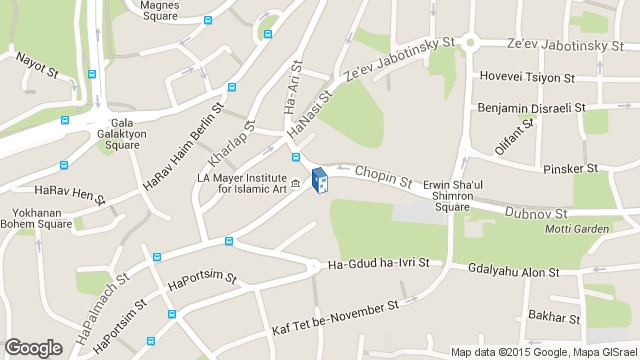