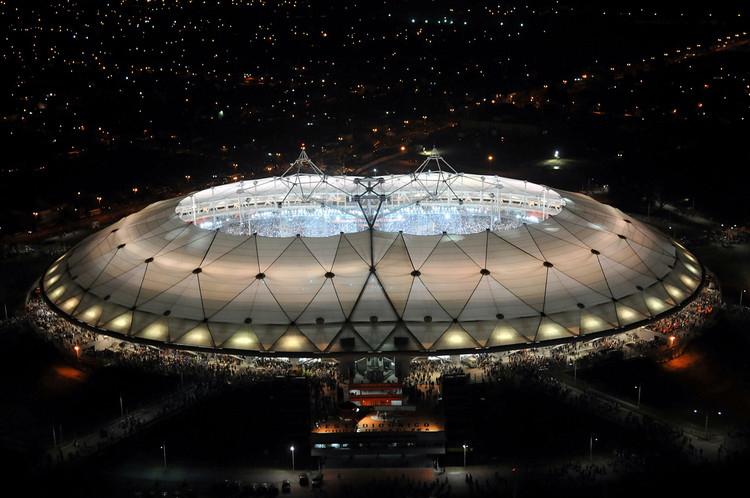 Text description provided by the architects. The Estadio Único Ciudad de La Plata, which won a first prize in a national competition, projects both through its name and through its formal conception, its role as a stadium shared by the two main soccer clubs in the city of La Plata.

The quality of our urban environments and landscapes has a direct influence on the quality of our lives as citizens, ultimately those truly impacted by architecture and urban design. That is why the Estadio Ciudad de La Plata project is in tune with the theme of the Biennial: "Architecture for All: Building Citizenship.”

If at this edition it is a priority "to spotlight those citizens who live, create, have families, study, work, produce, walk, feel and experience emotions in a place where architecture and urban design is a constant presence," we can say that the Stadium is a collective forum which allows citizens to come together in a facility whose dimensions reflect and befit their city and region.

The shape of the stadium is determined by the intersection, the collision of two circles. It is a stadium with two centers, two sectors entering into conflict, and the design features the architectural resolution of this conflict. Its shape thus symbolizes the relationship between the two clubs, which share the field of play without losing their individual identities.

Project plans call for a complete roof and portable turf system, committed to a multi-functional outfitting which will allow it to host events and competitions under any kind of weather conditions.

The stadium’s roof, which spans out 240 m long by 180 m wide, was crafted employing a tight structure (tensegrity), whose main elements are metal masts suspended from a triangulated and prestressed network of lines and steel cables covered by a translucent membrane consisting of a fiberglass mesh with a Teflon cover. A perimeter compression ring, with a latticework structure of steel tubing, supports the weight of the roof and box seats, connected to the ground by 46 braces at the top of the stands’ slope.

A central scoreboard hanging from the structure features 4 screens totaling 140 m2 of LED technology, providing for optimum viewing from all areas of the stadium.

The facility seats 40,000 spectators, with a perimeter ring housing box seats of different categories, and restricted areas for the press and authorities.

The stands rest on compacted embankments that exploit the land on which the stadium is located as their foundations. This produces a change in topography yielding a new kind of design in which horizontality gives way to a series of undulations which, stretching upward, shape the stadium’s access routes.

The overall organization of the facility is based on the following:

a) Two paths which diagonally cross the field.

b) A winding, undulating and organic path which wraps around the field like a belt.

The overlapping of these two elements and their relationship to the boundaries of the field yield a varied sequence of sectors or differentiated areas which allow for the establishment of the locations for the different program elements.

The entire project is integrated into a large Urban Park, including parking areas found in large wooded areas forming part of the whole facility. A heliport and bus parking zone ensure accessibility to all kinds of patrons.

The Urban Park sports complex in the city of La Plata also boasts a track and field stadium with a capacity for 6,000 spectators, various outdoor sports facilities, and a swimming pool. 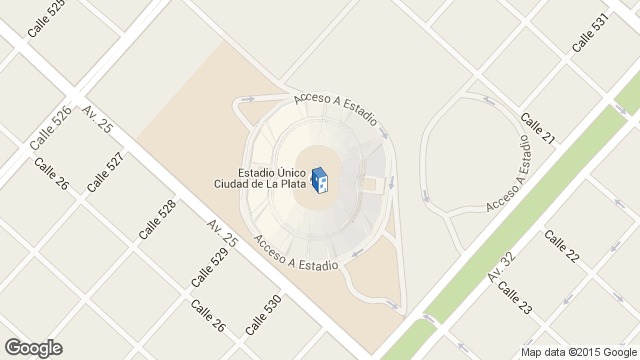