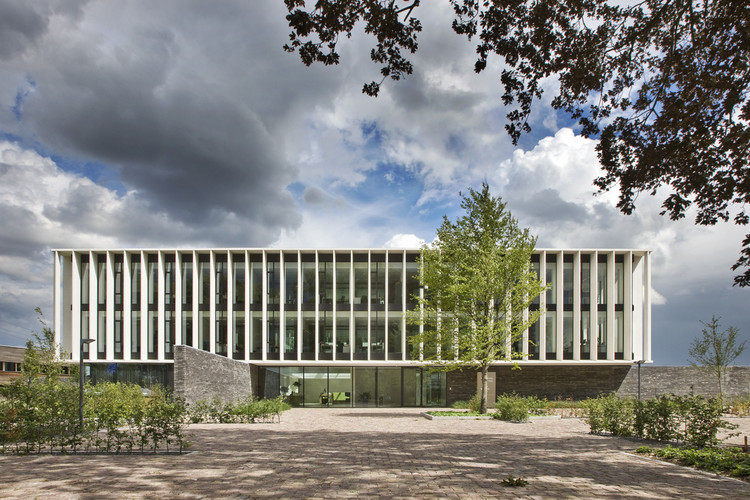 Text description provided by the architects. The offices of Witlox Van den Boomen are situated in a striking villa at the junction of the A2 and the Eindhovenseweg in Waalre. Having outgrown its existing accommodation, the firm of civil-law notaries, lawyers and accountants asked Van den Pauwert Architecten to design a new, contemporary extension, which was also flexible enough to meet the demands of the new working relations within the rapidly growing organisation.

The specifications for the new office provided for around 6,000 sqm of office space, conference rooms, a staff restaurant, classrooms and an archive divided over four floors. The basement is devoted mainly to large rooms for presentations, classes, the archive and technical facilities. The public area and general functions such as conference rooms, the staff restaurant and various service areas are located on the ground floor. A corridor connects the ground floor with the villa’s annexes. For the first and second floors, the standard floor plan is divided entirely into offices of various shapes and sizes.

The architectural challenge for the building involved two paradoxes. The first was the client’s request for an open office environment that still provided privacy. The confidential nature of much of the information discussed and the legal requirement to maintain Chinese walls between the different professional groups within the firm called for a layout with predominantly private offices. At the same time, however, the client wanted to encourage closer interaction between the different disciplines and the co-workers and give its clients a clearer insight into what is happening there. Witlox Van den Boomen is a far less formal organization than the stately villa might lead one to believe. With the new building, the firm’s image is more closely matched with its true identity.

The second paradox was the need to design a building with its own distinct personality but without detracting from the prominent character of the villa. The new building had to be striking without being dominant. The proposed volume was massive in relation to the size of the site and threatened to overshadow the villa.

The answer to both paradoxes is a compact, square building that complements the villa. A point symmetry at the heart of the building brings together all the sight lines and contacts. The top two floors do not favour any particular direction. The views extend equally to all of the building’s beautiful surroundings and not just to the Eindhovenseweg that the villa faces. The building projects a less formal stature than the villa at that location.

From the Eindhovenseweg, the new building is clearly positioned less prominently than the existing buildings, on an open site where the lane of old oak trees no longer stood. As a result, the remaining trees at the entrance to the site have regained their former function and the new building has its own entrance. To the rear of the site the new building does occupy a formal position on the axis of the tree-lined drive. The site previously had a distinct front and rear. This has been remedied by the new building, which has fully integrated the site with the surrounding meadows.

The floating floors and the transparency of the ground floor contrast with the closed and authoritarian character of the more elevated villa. This is reinforced by the fact that the ground floor is recessed at the corners and provides a light and airy feel to the basement. The building now seems to float above the landscape, with a seamless transition from the outside to the building at ground level.

The centrifugal composition of the garden walls firmly anchors the building on the site. They enclose four different scenic chambers that serve as extensions of the functional rooms on the ground floor. Each chamber has its own unique quality.

The first scenic chamber encloses the villa and farm and is connected to the post room and goods entrance, from where supplies are distributed to the entire site. The second scenic chamber marks the main entrance to the building. The third chamber on the south side of the building contains a garden and a patio adjoining the restaurant, which provide a pastoral view over the fields. The fourth chamber contains the old tree-lined lane flanked by meadows and the staff car park. The chambers come together in the atrium.

Inside, the atrium forms the centre of a point symmetrical layout of nine planes. This structure is further subdivided in the general grid of the louvre walls. The result is a variety of possible layouts and exciting vistas in and through the building. The building’s structure is clear and straightforward. It organizes the degree of transparency and reflection. The basic tone of the building is white. The light partition walls between the offices and the conference rooms are transparent and black. People, plants, furniture and the exterior add extra color to the building.

The concrete louvres scarcely interrupt the outside views from the upper floors and offer a constantly changing prospect from the offices. The louvres form a coulisse and serve as an intermediary between the inside and the outside. As a result, the separation of the interior and exterior is never completely open or closed, but always both, depending on the perspective.

With the abstraction and rhythm of the concrete louvres, the reflection of the sunlight is constantly changing. This gives a different tactile effect than the tactility of the detailed brickwork of the old villa. It gives the building its own unique character. The building is both ambiguous and explicit.

The building’s layout has prompted a different style of cooperation and created a new commercial image for the client. Transparency has become a guiding principle of its business; throughout the building people have visual contact with each other and with nature. 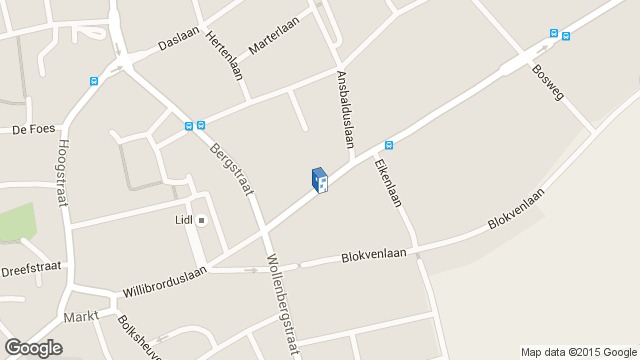