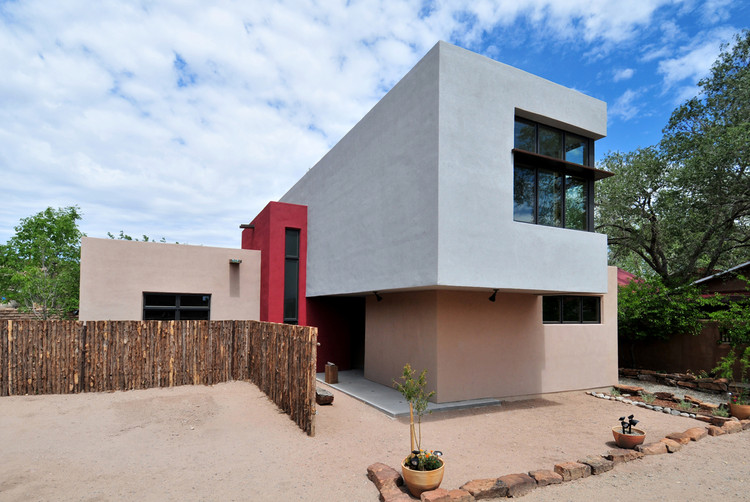 Many in the custom home market believe building green means spending lots of it. Defying this widely-held notion is a breakthrough LEED Platinum house project, designed and built by Praxis Design/Build in Santa Fe, New Mexico. Praxis embraced this project to prove non-production homes can be designed and built Earth-friendly on a tight budget, without sacrificing style. The cost of the completed house came in at $188 per square foot. The award was announced July 21, 2011 by the United States Green Building Council (USGBC).

The Rothstein-Meckler house is one of only approximately 400 custom homes constructed worldwide that have won the LEED Platinum designation, according to the USGBC, the originating and administrative body of the LEED program. Leadership in Energy and Environmental Design, or LEED, provides the construction industry with a definition of green building design and a means to measure green construction techniques and their effectiveness. As part of this program, the USGBC created a rating system to promote sustainable building practices. Since LEED’s inception in 1998, 993 house projects of all types, totaling 3,365 homes worldwide, have received a Platinum award.

A house can earn a maximum of 136 points. A structure the size of the Rothstein/Meckler house requires 80 points to obtain the highest award, a Platinum. This Praxis-designed house won 88 points.

The Rothstein/Meckler house also has achieved an Energy Star rating, as well as an Indoor airPlus certification. The latter designation is an EPA-sponsored program designed to encourage the construction of homes with improved interior air quality. It addresses issues such as moisture control, radon control, pest management, improved heating and air conditioning technology, improved combustion venting and reductions in chemical content of building materials.

Scott Rothstein and Marcia Meckler approached Praxis in 2009 with a desire to retire in Santa Fe at the conclusion of Marcia’s career with the U.S. State Department. “We had a very limited budget and our focus always remained on elements that supported our passion – our art collection,” said Scott, referring to their remarkable assemblage of art objects and figurines they collected during their many years of travel.

Scott and Marcia turned to architect Gabriel Browne, owner of Praxis Design/Build, to realize their desires for a new home. “I was convinced Scott and Marcia could afford not only economy, but style as well, suitable for showcasing their art,” said Gabriel. “And with the help of Scott and Marcia, we did it all. The added bonus was a green building design that will dramatically lower their utility bills for decades to come.”

Proof of this accomplishment is a dramatic home design in tandem with a Home Energy Rating System score of 58. The HERS Index compares the average house built in 2006, which receives a score 100, with a house that uses zero energy. The lower the score, the better the rating. A score of 58 means the Rothstein/Meckler house is 42% more efficient than the hypothetical 2006 home. (As a point of reference, a house must score 85 or below to qualify as an Energy Star structure, only 15% more efficient the 2006 house.)

Gabriel has been interested in green building design long before it became a popular concept. In 1989 he designed and built his first green project in Rutheron, New Mexico, a home totally independent of the grid. The Artyard A1 building in Santa Fe’s Railyard redevelopment project, a commercial building he designed starting in 2005, was slated to receive a LEED Platinum award in 2008, the first structure in New Mexico to do so. The economic downturn that same year delayed completion of this project, forestalling this distinction.

Praxis began construction of the Rothstein/Meckler home in April 2010 and completed the work five months later. The result is a two-story design encompassing 1,760 sq. ft. of heated space, built at a cost to the homeowners of just $330,400. 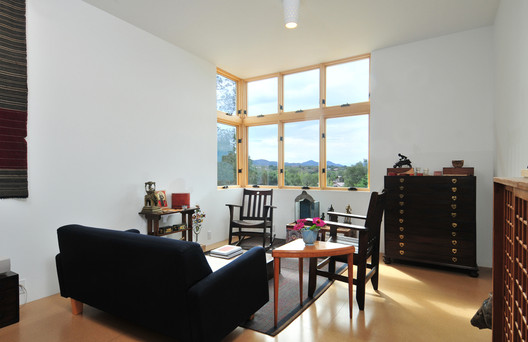