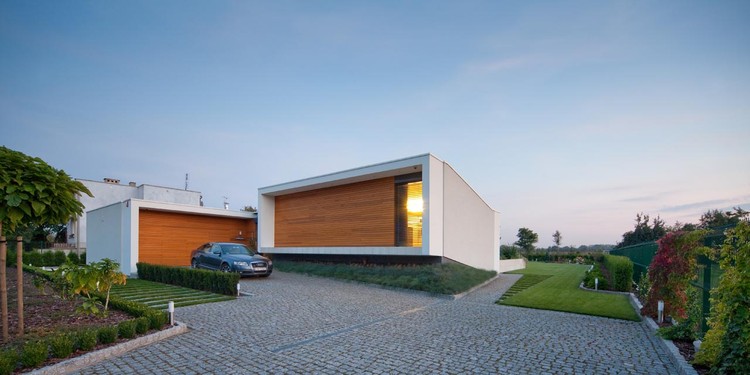 Text description provided by the architects. The clients, a middle-aged couple, approached us with one definite request – they wanted to build a house with no stairs, a house that would be equally practical and enjoyable when they get old. The site offered no obvious clues – a flat piece of land in a second line of buildings, in a suburban part of the city of Wrocław, among disappearing traces of a rural past, surrounded by a chaotic mix of houses of all styles, materials and conditions.

The first decision consisted in placing the house along the northern border of the plot, towards the narrow access lane, so that the volume of the house shelters the remaining large garden from unwanted views and nuisances of the nearby road.

The “T”-shaped plan clearly reflects the distribution of uses within the house. The long wing visible from the street accommodates the common, “public” spaces of the house. However, the almost entirely solid front façade, clad with wooden slats, forms the closed backside of the large living area. Only after entering the house through a wooden door adjacent to the volume that forms a double garage, one can grasp first views of the other face of the house – its long, glazed façade opening to the sunny terrace and the garden. The central entrance point allows for a convenient and discreet communication to both wings of the house. The “public” wing features a slanted ceiling, adding to the feeling of openness and spaciousness. Behind the side wall of the living room, connected by a two-sided fireplace, is a “home cinema”, a space for watching films and listening to music, with acoustically clad walls and an incorporated screen.

The kitchen is at the heart of the plan and is also a transition space between the living room and the wing of the house where bedrooms are located. The three bedrooms also open to the terrace and the garden with full-height sliding windows, though sneaking into the rooms from outside requires jumping above a narrow strip of water – a gesture towards granting more privacy to these spaces. The row of bedrooms features a bathroom at each end, and the corridor along this wing is lit from above by square skylights.

The only part of the house without natural daylight, a strip between the garage and the private wing, houses a technical room and another toilet for guests. The terrace is clad with light-colored terrazzo in large format tiles. It is connected to the garden by a wide ramp with strips of grass and grey granite paving blocks. The fully glazed facades are protected from sunlight and glare by a thin canopy that creates a frame for all the views that the open interior of the house may offer from the garden side. 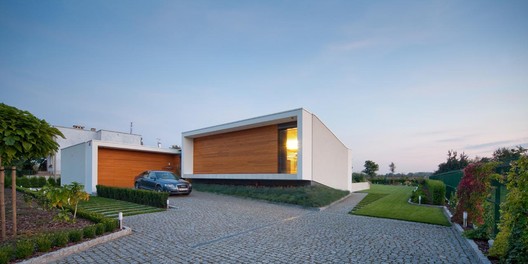 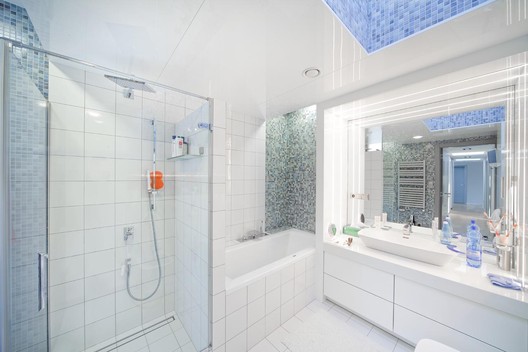