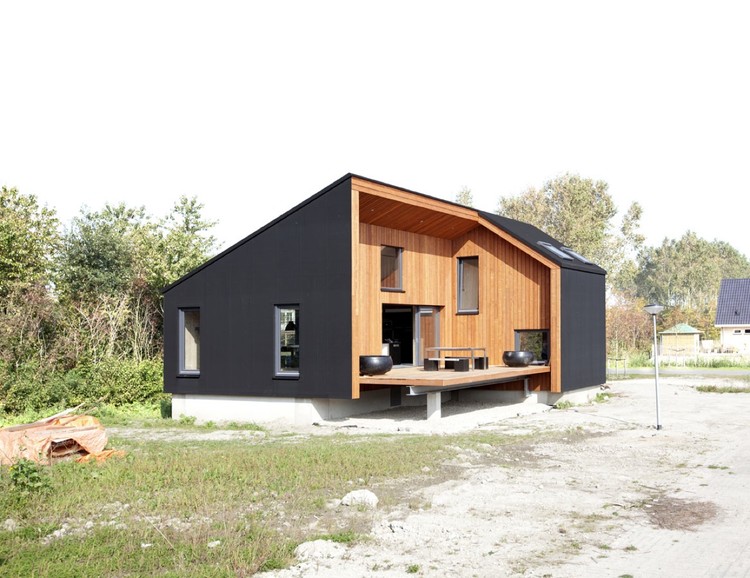 Text description provided by the architects. The RUBBERHOUSE is an experimental single family house built in energy efficient and sustainable cross laminated timber construction, clad in a black EPDM rubber skin. Being awarded first prize group in the 2006 competition “Eenvoud” (Simplicity), the RUBBERHOUSE has been designed as core and shell and is now one of 12 houses in the experimental new development “De Eenvoud” in Almere (NL).

"De Eenvoud“ is a follow-on settlement to the experimental housing settlements “De Fantasie” and “De Realiteit” developed in the 1980’s and therefore stands in a long tradition of experimental, free and self-determined building. Originally these were developed to promote the model of privately financed housing in the Netherlands. The new settlement is located on a clearing adjacent to a natural conservation area and is only accessible by a small residential road. The city centre and the nearby Ijmeer are easily accessible via a well developed network of cycle paths. Especially the edge of the surrounding forest creates an exclusive and nature-orientated site for the detached houses.

Simplicity in the sense of simple living is not something suppressing or restricting, but rather when performed as a voluntary act enables one to experience life aside from life styles driven by status. Simplicity negates the imitation of predetermined and unachievable images. Simplicity demands a certain degree of modesty, though simplicity is not meant ascetic, but it is a way to increase ones quality of life. Simplicity does not deny luxury, but can even evoke a different richer kind of luxury. This luxury can only be produced through impartiality towards things. Simplicity means realising potentials and transforming meaning.

In its sculptural shape the RUBBERHOUSE is derived from the archetypical and simple form of dutch barn architecture. The cross laminated timber building consists of a double height space covered by an asymmetrical gabled roof and a single storey space covered by a shed roof. The external skin is clad in black EPDM foil, which is commonly used as a single ply membrane for flat roofs. The material generates an immaterial and rough aesthetic, which stands in stark contrast to the cut out forming the buildings generous terrace. The cut out generating the terrace is clad in untreated larchwood, transporting the habitable atmosphere of the inside into an external habitable space. In contrast to the rough external appearance the internal rooms are determined by the warm charm of the treated timber surfaces.

The RUBBERHOUSE consist of a two storey part with lower ceiling heights, which is connected via a split level element to the single storey main living area. The concept sets smaller private rooms against a generous open living area, whereby ceiling levels vary from 2.30m at entrance level up to 4.80m in the main living room. At ground floor level of the 2 storey section an office, WC, bathroom and cloakroom are located. The open plan kitchen and a pivoting fi replace form part of the generous living area. The upper level consists of bedroom with ensuite bathroom and walk in wardrobe. Large sliding doors allow the extension of the living area onto the 40 m² terrace. The raised terrace is slightly elevated, thereby offering a good view across to the new neighbourhood, whilst at the same time providing some distance and privacy. Clear visual axes and relationships throughout the whole building strengthen the robust and open layout, enhancing the visual connection with the surrounding landscape. The nearby forest can be experienced throughout the entire house.

The building is grounded on a partly pre- fabricated ring foundation on top of 12 concrete piles. The ground bearing slab is made of precast, highly insulated hollow core slabs. Using a high degree of prefabrication already during foundation works enabled a fast and efficient programme. The load bearing facade as well as the few load bearing partitions are constructed of cross laminated timber panels. The untreated surfaces of these walls are left fair faced to completion. The roof is constructed of large, prefabricated and highly insulated timber frame panels and was installed within just one day. The high amount of prefabrication not only enabled an extremely short programme on site of just 3 months, but also significantly reduced man hours. The facade has been designed as a highly insulated ventilated cavity construction. Bar the terrace walls, which are clad in larch, all external wall and roof surfaces are clad in EPDM. This common single ply membrane is usually used as a sealant for flat roofs. The double glazed windows are part fixed and part open able, their timber frames being painted in grey.

In stark contrast to the external black appearance the warm fair faced surfaces of the timber panels dominate internally. The house has been designed as part self build, whereby internal finishes are being applied by the client himself. Within this concept the robust aesthetics plays a large role, where future fixtures and furniture will substitute themselves. Although mainly industrial products were used and none withstanding the rough external appearance the timber surfaces provide a comfortable atmosphere and internal climate. As per the concept of enabling self build finishing’s no conduit trenches were cut into the timber panels. All MEP services and installations are concentrated in a few plasterboard partitions and sockets are recessed into the concrete fl oor. According to the industrial appearance and to guarantee a high degree of flexibility some conduits have been surface mounted to walls and ceilings. The building is heated by under fl oor heating which is connected to the community heating network. Additional heating can be provided via a wood stove. Bathrooms and WC’s are ventilated via controlled extract ductwork, some windows in habitable rooms are equipped with automatic opening vents.