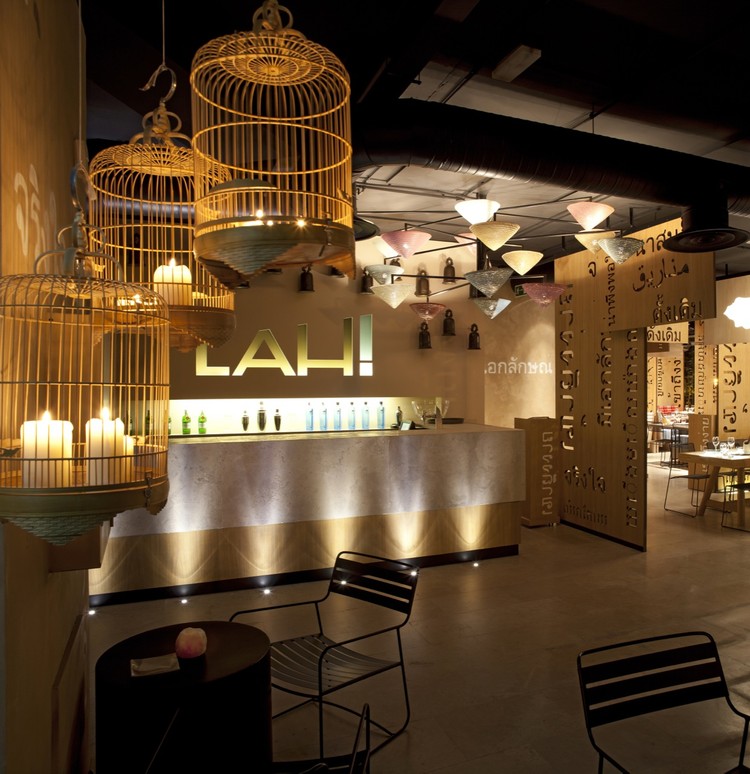 Text description provided by the architects. LAH! Restaurant faced the challenge of introducing South-East Asia through a new, innovative and unique space.

The project idea is that of bringing the core of a distant and unknown land with different cultures, customs and religions and shaping it in a design which can produce a friendly space, speaking of architectural forms and proportions, to generate intense sensory emotions in the audience. LAH! excites the visitor who is surprised finding a different place without the typical features of a Chinese or a Japanese restaurant. To achieve this aim, we offer an unusual spatial distribution, thought as a continuous fragmentation of the main space, where vertical wood panels hung from the ceiling are opposed to those fastened to the floor and those leant against the walls. These panels remember those advertisements based on old images of huge Asian cities where the apparent disorder generates in our mind the perception of an harmonious space through the use of a fluid architectural language with a strong personality. Beyond all doubt, these segmentations assure a pleasant experience in a comfortable environment composed of intimate spaces which turn out to be welcoming and stimulating to those using them. Entering this restaurant, the customer realizes that LAH! is different from the rest!

People communicate through language and writing. It is curious and amazing that in this area of the world people use completely different writing systems according to their historical and cultural influences: Indian, Chinese, Arabic… For this reason, we thought it would have been interesting to work at a graphic level on some South-East Asian writing forms, merging them in the project in such an informal way. Their employment represents the soul of the restaurant creating transparency games in the wood panels, where silhouettes have been carved. We can find Thai, Cambodian and Jawi words (the latter is the ancient alphabet used in Malaysia and Indonesia) which are distinguishable for their huge aesthetic power.

When we think of Asia, it is not hard to imagine huge paddy fields, wonderful coasts and paradisiacal beaches. All these sceneries can easily be assimilated to the concept of nature. Indeed, the reported landscapes and the daily use of natural elements have always been present in the Asian culture; wood, stone, natural rubber and rattan coexist in everyday environments, apparently chaotic, which in contrast present, on the outside, a peculiar aesthetic image. Therefore, during the design stage, we thought to use only those materials that could be found in nature in order to communicate these feelings. This is why we have only made use of recyclable materials to develop a distinct architectural awareness and to be consistent with the project. Entering LAH! is like entering into different South-East Asian towns at the same time and being welcomed by informative signs with distinct writings on them by which we understand we are dealing with different places, cultures and cooking traditions…all in one place!

The space is enriched by particular decorative elements originated from the interpretation of traditional items. For instance, the lamp in the entrance is composed by typical Asian hats, then painted with various colours; bells, which are usually found in the Buddhist templar, are here located in the entrance to welcome the customers, and benches are inspired by the typical Thai pillows in their forms and colours.

The harmonious combination of decorative elements, which resemble traditional items, and cosmopolitan components creates a sort of interplay between simplicity and strong personality. This fusion aims at fulfilling the expectations of the customer, who will remember this place for its uniqueness. The outcome of all these ideas is a cosmopolitan, authentic, welcoming, informal and natural place which combines refinement with the oriental culture of the South-East Asia in a huge modern city like Madrid.

As we said before, we used only natural materials; finishes and surfaces keep the personality of materials and bring out their intrinsic properties. The wood, used for panels, is simply treated with oil to protect it and keep its natural aspect. In this way, the essence of matter is maintained both from a visual and a tactile point of view. The floor and the counter are made of Campaspero stone (a typical Spanish natural stone).

For the texture of the walls sand and coloured paint have been mixed in order to get an authentic rustic aspect. The technique being used is completely handcrafted: various coats of paint have been applied in order to reach a satisfying effect. The obtained surface is not uniform, so that, as years go by, paint aging won’t be noticed and frequent maintenance will be avoided. Apparently simple furniture is a mix of international design items and elements created by the office IlmioDesign. Some examples of this combination are benches, tables and decorative lamps in the shape of hat.

The walls of the bathrooms are covered with Vitrogres hexagonal mosaic. The choice of colours used for the tiles draws inspiration from the corporate colour palette. The washbasins support surface is also made of Campaspero natural stone and taps and fittings are an example of high craftsmanship: around a copper tap two curves have been created using some copper tubes. Finally, lighting has been given special attention. The mix of spotlights, led guides on the floor and various decorative hanging lamps is aimed at providing the space with a spectacular uniqueness without forgiving the comfort and convenience of the customer. 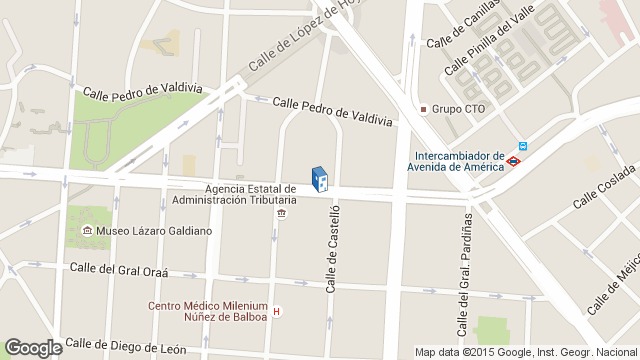