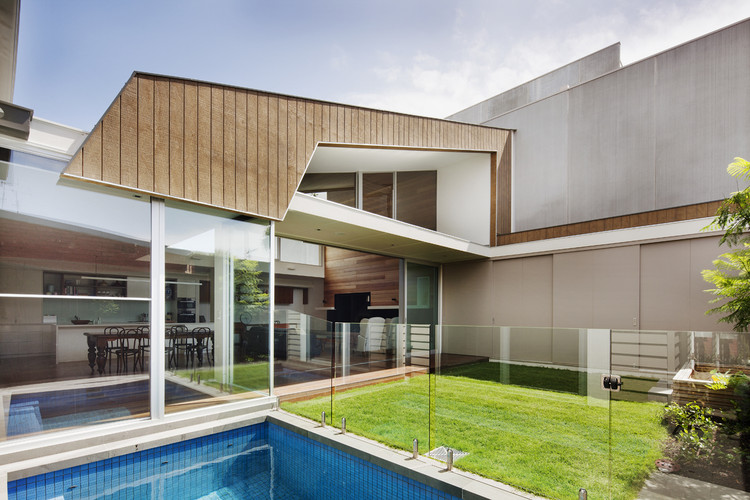 Text description provided by the architects. This project and site presented some great opportunities as well as the obvious constraints, a generous width considering its inner-city context was balanced by a lack of depth and a two-three storey concrete wall on its rear boundary.The existing house required stripping back to its original form by the removal of add-on lean-to structures and overgrown gardens. Given a romantic attachment to the building it was to be carefully restored re-instating period details and preparing the plan for the new additions. However it was the new additions that were free to explore various spatial and architectural options that could take advantage of the unique site.

It was here that the idea of replacing the old lean-to structures with a new one was explored, instead this time by leaning it up against the adjoining boundary wall rather than the existing house. In essence it is an angled roof pitched away from the existing house almost resting itself up against the dominating rear boundary wall. It became very apparent that not only was this proposal screening much of the undesired wall it was creating a rare volume of space and an expressive built form.

Facing north with a predominately glass façade the main living zone provides the perfect orientation to promote passive solar design principles, its articulated fully operable façade accepts and rejects the sun as required whilst also offering visual relief, light and shade whilst not overwhelming the courtyard space it shares. A focused attempt was made to blur the edges of the building, intentionally creating a space that continued from side boundary to boundary and one that could be fully experienced by the occupants. The pool, deck and lawn are conceived as extensions to the living zones and are detailed to emphasize this connection.

The transition from the existing house and perimeter service areas were purposefully compressed with lower ceiling heights to further emphasize the over scaled living zone. Internally this generosity of space allowed for an oversized fireplace that together with carefully detailed joinery became the focal points of this room. The walls and ceiling are wrapped in timber lining boards creating a warmth and enclosure which is afforded given its scale.

The material palette intentionally avoids a highly polished over styled aesthetic, rustic grade spotted gum flooring, raw concrete, timber lining boards, rough sawn shadow-clad external cladding and bluestone help ground the building. By having a willing and trusting client and an accommodating builder this project represents a true team effort that has produced a very successful result. For the RVA team the commitment to a creative design approach often produces unpredictable and exciting design outcomes, something that this project has truly benefited from. 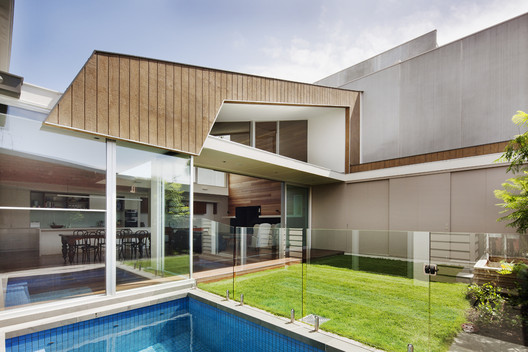