Save
Gehry's Eisenhower Memorial up for Debate
Share
Or
Copy

Pritzker Prize architect Frank Gehry’s designs are not shy to controversy, however the monumental significance of this design has raised the Gehry debate to an even higher level. The winning design of the GSA Design Excellence Program competition that began in 2008, Gehry Partners were chosen from forty-four design firms, then narrowed down to four finalists at which time the panel evaluated previous work, conducted interviews, and responses to the memorial’s pre-design program.

Upon selection Gehry Partners provided 3 options for the Eisenhower Memorial Commission to choose from and the final design was unanimously selected in March 2010 and featured here on ArchDaily. However since the initial design was revealed it has been met with debate, including a competition hosted by the National Civic Art Society this past spring inviting classical architects to submit alternative designs for the Eisenhower Memorial.

Update: Eisenhower’s grandson David, a commissioner for the Dwight D. Eisenhower Memorial Commission, has not publicly voiced support for or against the Gehry/Wilson design. 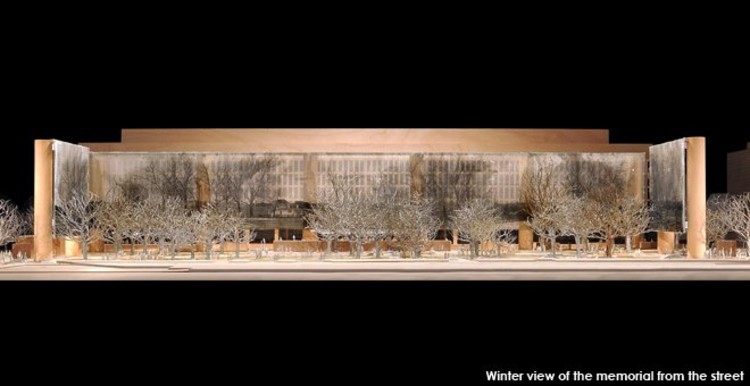 In defense of the Gehry’s chosen design Daniel Feil, the executive architect at the Dwight D. Eisenhower Memorial Commission stated, “Different people like different things.  But this is a design that is quite an extraordinary remembrance of President Eisenhower, and that will transform this plot of land.”

Hoping to halt Gehry’s modern interpretation of what Eisenhower’s memorial should be, the National Civic Art Society’s competition resulted in a design that would be more classical.  Designed by Daniel Cook, the proposed memorial would communicate a theme of “Peace Through Understanding”, featuring a large arch and two large columns with images of Eisenhower as a general and president, and two fountains.

“Some people will say these projects are not important. Some people will say no public money should be spent on these works.  Our argument is that if you have good, timeless designs you can get public support and these monuments can be funded primarily through private donations rather than public taxpayer dollars,” said Eric Wind who chaired the National Civic Art Society’s competition.

The question is how the $16 million allocated by the government for both the competition that led to the selection of Gehry design and the design itself has been spent so far, and whether the competition was ever truly competitive. Wind noted that his classical competition cost just $2,000, but the process it used was quite different from the government’s.

“We want further explanation as to how they spent the money they have been allocated by Congress,” Wind told The Huffington Post. “We also are curious to see their interactions and correspondence with Gehry Partners both before the competition and after, but especially before.” Wind said the National Civic Art Society hopes to find evidence that shows Gehry was always the favored candidate for the project. But for now, he won’t say publicly whether his organization has any evidence to back up that claim.

But now back to Gehry and avant-garde theater artist Robert Wilson’s Eisenhower Memorial design, as described by the Eisenhower Memorial Commission, “From a central location featuring a grove of oak trees, visitors will move to different parts of the memorial, where themes from Eisenhower’s life will be presented. The selected design concept includes columns along the north and south edges of the site, paying homage to the memorial traditions of the Lincoln and Jefferson memorials, while respecting the historic vista along Maryland Avenue. Large memorial tapestries of woven stainless steel mesh supported on the colonnade of limestone depict images of Eisenhower´s life, amplifying the setting and creating an ideal background for the memorial experience.”

Initially a big topic of discussion was the metal tapestries that line three sides of the 4 acre site, and the limestone columns that will support them. Designed to feature images of the 34th President’s youth depicting “the barefoot boy from Kansas”, the stainless steel billboard-esque tapestries will be transparent enough to still provide views for the Education Department headquarters. Last month a prototype of the metal tapestry was on display at the proposed site, resulting in members of the Commission of Fine Arts having positive feedback calling them “dazzling” and “delightful”.  However, the size of the limestone columns was still a concern as one member called them, “the biggest, baddest bollards around.”

Honestly though, what has seemed to be the main focus of discussion of the Gehry and Wilson designed memorial is the idea of memorializing Eisenhower’s childhood, rather than the persona of a war hero and commander in chief. Gehry and Wilson upon presenting their latest designs at the National Archives earlier this month discussed their creative approaches to the memorial – “The barefoot boy from Kansas became very compelling,” shared Wilson. Setting out to capture Ike’s personality, the two wanted to communicate Eisenhower’s humility, humble origins, and quiet use of power, the ‘classic American archetype of the self-made hero’.  Still being considered by Gehry and Wilson are a series of carved panels suggestive of the frieze on the Parthenon that would highlight both Eisenhower’s military and presidential careers.

Eisenhower family members lie on both sides of the fence, as three of Eisenhower’s granddaughters issued a statement of concern regarding the concept and scale of the memorial and requesting a timeout in the approval process. “We feel that now is the time to get these elements right — before any final design approvals are given and before any ground is broken.” But on the other side is Eisenhower’s grandson who is a commission member and still in support of the design.

From the Washington Post regarding the most recent National Capital Planning Commission hearing:

At the National Capital Planning Commission hearing, Carl W. Reddel, director of the memorial commission, praised the Los Angeles-based Gehry and his team for being flexible and responsive to concerns about the design. Since January, when an earlier version of the design was unveiled, the size of the main tapestry has been reduced, and two smaller tapestries have been rotated 90 degrees to keep sight lines open along Maryland Avenue and create a more contained, theatrical, boxlike space framing the memorial. More green elements, including a grass-covered allée through the middle of the site, have been included.

But Reddel acknowledged that the memorial commission is moving quickly, which may be rattling a town that likes to take decades considering additions to its monumental core. His commission is racing to meet an Oct. 28 deadline to reserve a place on the NCPC’s Dec. 1 meeting agenda, at which it hopes to gain preliminary design approval. The current schedule calls for breaking ground in late fall 2012 and opening on Memorial Day in 2015.