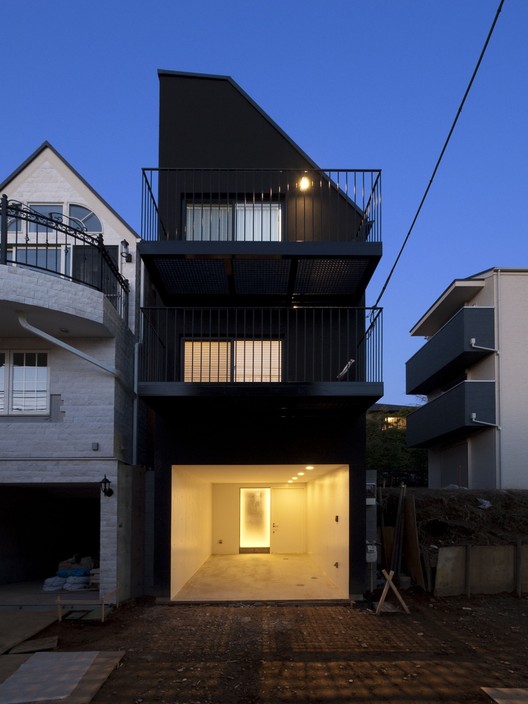 Text description provided by the architects. A home for a couple and child stands on a lot 3.7 meters wide and 17 meters deep. Planning of the home focused on how to develop a pleasant layout with sufficient perspective for this slim lot. The lots to the left and right were also for sale and of similar breadth and depth. The plan assumed that spacing between the houses would be tight. Morover, the site is on a grade that rises by over 2 meters from the street facing. The ground floor where the entrance is located gradually submerges underground toward the back, where no inlets are possible. Square footprints or small lots with sufficient breadth permit distances and pathways within the plan that can create spaciousness. But for this lot, the depth of 17 meters could actually create remoteness between rooms, while the significant difference between breadth and depth might create a pinched feeling.

The plans considered these issues, and divided the slim space into three zones: the stairwell in the center, and rooms on either side of the stairs. The entrance and bath were assigned to the ground (basement) level, the living and kitchen areas to the main (first) level, and bedrooms to the upper (second) level. All of the rooms unfold outward from the stairs. The stairwell has limited openings to the outside, in contrast to the bright rooms on either side with large openings for natural light. The dark impression of the stairwell augmented by the finish creates a powerful contrast, so that the brightly finished rooms practically stand alone. The room lengths were trimmed to provide better balance with their widths, while the bright finish and windows peering at walls of the neighboring homes helped to limit any sense of spatial constraint.

Stowing the sliding doors to the main-level rooms on either side of the stairs causes the dark stairwell to vanish and creates the illusion of directly adjoining spaces. Although movement on the floor between rooms is physically distant, the feel is a much closer connection. Instead of a single lengthy room and simple perspective on each floor that would merely emphasize the limited width of the house, connecting rooms with different characteristics create a sequence, a sense of distance that amazingly makes the space to the back seem both near and far from the room where one stands.

The walls and ceiling structure to the stairwell remain exposed for a considerably different quality than the white-washed walls of the rooms on either side. Shelves are positioned between the exposed structural members in the stairwell, so that books and objects can form part of the ambience. The stairwell thus functions as a pathway and a display of the home owner’s interests. The shelving amidst structure continues without interruption from ground level to upper level ceiling. The arrangement adds vertical continuity to the horizontally stretched plan.

Finally, the bath, located deep within the subground portion of the ground level, is furnished with a lightwell vaulted to the upper level for the additional benefit of ventilation. The micro garden in the lightwell is visible from the main level for an additional vertical connection besides the stairs. Exterior walls are black to actually emphasize the slim figure of the house, but the car port, which can tend to be dank, is finished with white to impart a brighter image.