Save
The Mashrabiya House / Senan Abdelqader 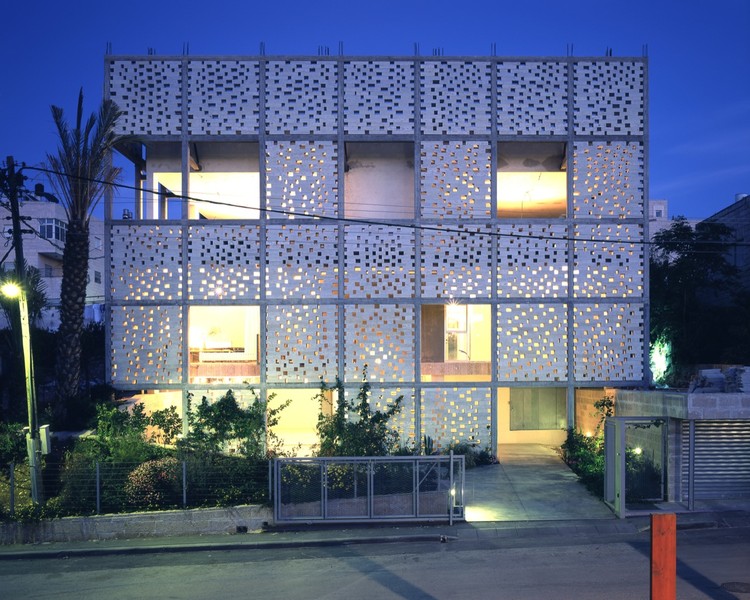 Text description provided by the architects. The "Mashrabiya House" is located in the Arab Palestinian village Beit Safafa between Jerusalem and Bethlehem. The house was designed as a contemporary re-interpretation of traditional elements of Arab venacular architecture, providing at the same time new and imaginative solutions for the transforming social and cultural landscape of the village on the brink of urbanization.

The principle of terraces and retaining walls, one of the most typical feature of the traditional Arab landscape, was adopted for steeply sloping building plot, forming an earthbound, partially inhabited ‘landscape ground’. The basement itself is carved into the hillside forming a massive stone-clad platform like a deck with sunken courtyards as light wells. This deck accommodates a workshop, studio and gallery and therefore separates working and public functions of the house from the living areas above. At the rear side of the plot this platform folds up to become an enormous, inhabited stone clad retaining wall, which accommodates several apartments.

The landscaped ground forms a stage on which the building itself stands. The heaviness of the ground is contrasted by the lightness of the vertical structure. The floating effect is achieved through the creative interpretation of an Arab “Mashrabiya”, a latticed window screen that traditionally formed a threshold between private and public spaces. Here, the wooden screen is re-imagined in the form of a large-scale stone envelop that surrounds the building, combining the “Mashrabiya” motif with stone. Its typical semi-transparent effect is achieved by positioning the stones slightly apart, with irregular spacings, creating an effect of lightness and porousness. The resulting stone envelop is structurally separated by a narrow gap from the actual apartment building behind. The playful arrangement of small and large openings provide views from the interiors out into the landscape while carefully retaining their privacy.

The concept of open spaces within and around the house is equally informed by a sensitivity to traditional Arab elements while insisting on contemporary formal and material solutions. The raised courtyard between the rear retaining wall and the “The Mashrabiya” is reminiscent of a traditional hosh while the “Mashrabiya” at the top of the building becomes a ‘garden wall’ for a roof top garden following the ‘Bustan’ motif: a closed garden as a sheltered place of tranquility and privacy.

An Arabic interpretation of sustainability

Beyond the formal references to Arab vernacular traditions the building developed and tested concepts that could help to inform an agenda of sustainability while maintaining historical cultural continuity: In this way the “Mashrabiya” is not only a traditional threshold between public and private space but also provides an element of climatic control. The stone mass of the outer envelope acts as a climatic buffer: It helps to absorb heat during the day and release heat during the cool Jerusalem nights. Thus it protects the building against solar radiation as well as winter rain and winds. The gaps between the stones ensure a constant flow of fresh air. A further element of passive cooling is the 1m gap between outer and inner envelop. Not only does it ensure constant circulation of fresh air around the building the fact that it remains open towards the top of the building generates a suction effect like that of a chimney: Hot air travels upwards and fresh air is sucked into the gap from below.

Beit Safafa, like most villages in the Jerusalem area, is facing social and cultural challenges, typical for the transformation from a tightly knit village community towards a suburban centre. In this context the building provides an original solution by combining traditional building form with modern urban apartment living. The building is sensitive to the traditional fabric of the village yet open to new residents, as it combines living and working. It is also the home of the new Gallery for Palestinian Cultural Representation. 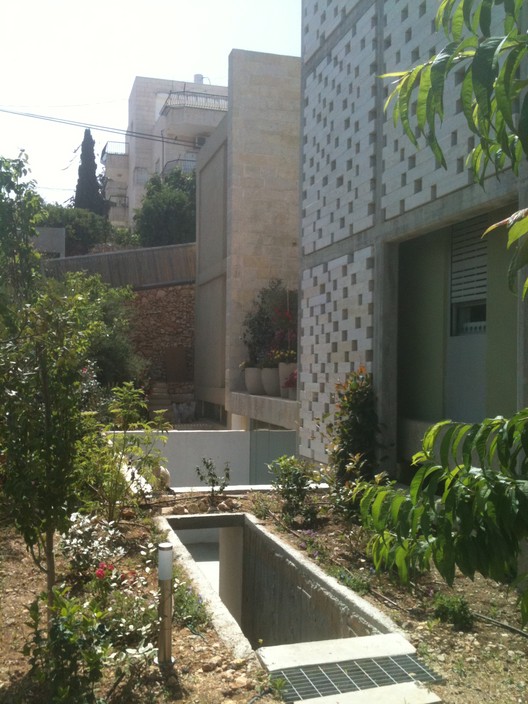