Hamar’s Kommune decided to take a pioneer approach to the construction of the new Stortorget Square, now just a parking lot. In an effort to bring democracy back to public spaces, citizens are invited to join the free on-site workshops that will take place from September to November, to question themselves about their city and work together to improve it. The workshops follow a horizontal and participative methodology, led by Ecosistema Urbano that will determine Stortorget’s new configuration, which is known as Dreamhamar. More images and project description after the break.

The free and open workshops are the main participatory tool of dreamhamar but they are not the only way of engaging in the redesigning of Stortorget Square, anyone with a smartphone or Internet access can have their say as well with dreamhamar application, which can be downloaded here. Dreamhamar is open and transparent. Every step of the process is shared on the website. Anyone can submit a blog entry with their ideas, and Belinda Tato, partner of Ecosistema Urbano, shares the latest news of dreamhamar on an weekly online broadcast.

Stortorget Square has become a space for experimentation. The idea is to get people to come to the Square because they will always find something new going on and engage them into expressing their ideas for the new Stortorget. On the opening event, grafitti artists Boamistura painted the square with a colorful pattern based on Norwegian cultural roots. A few weeks later, students from Bergen School of Architecture offered a free lunch and brought a lovely cow to the square.

Students and professors of five universities – Politecnico di Milano, Bergen School of Architecture, University of Alicante, University of Limerick, and Hogskolen i Hedmark – are already active participants of dreamhamar’s network. IED Madrid joined dreamhamar this week. For Belinda Tato, dreamhamar combines two social and urban trends, “The local municipality (Kommune) is giving it’s residents a wonderful opportunity to have a say in how they want a public space to be and work together with the architects. Also, dreamhamar will transform Stortorget in a meeting place where online interactions related to thinking about the new main square and the interactions that physically take place on the square will combine into new ways of using and understanding Stortorget.” She has a clear objective in mind : “I want to be able to look at a Lonely Planet book and see that they have changed their description of Hamar.”

Network design events, workshops and activities will last until December 2011 and the urban design of Stortorget Square will finish in June 2012. 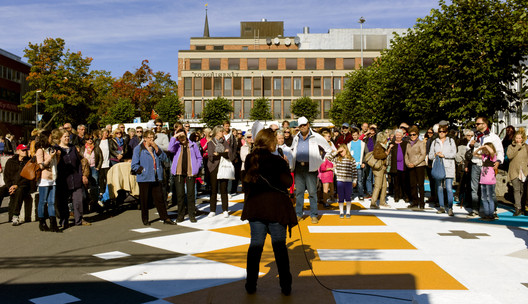