We featured this project while it was in progress back in June. MiAS Arquitectes recently sent us the photographs of the completed building. Check out more photographs after the break. 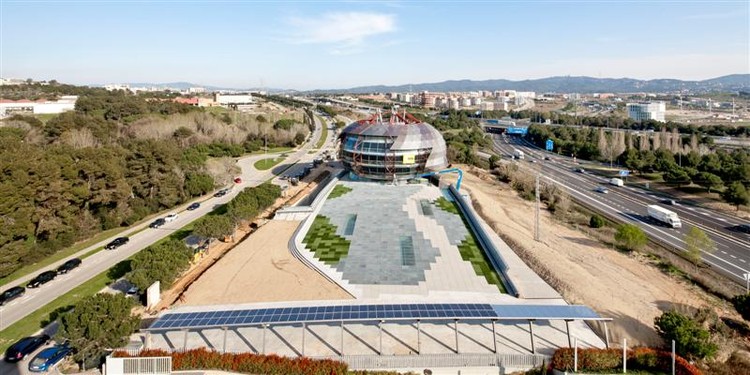 iGuzzini does not belong to the ground on which it sits. Like a balloon, Leonidov’s aerostat, it will attempt to escape from this world, seeking a new sky. It will describe the conditions of the light, natural and artificial, in its interior, it will refer to its origins, recognizing a geometric order, but above all it will want to speak to us of aspirations.

Moored to the ground, it belongs to this place, and to all other places. In reality, there are forms that can only be drawn once, buildings that can only be built once, the second time being a replica. We believe in this opportunity for iGuzzini. Because this form, imperfect, slightly deformed, belongs to the world of iGuzzini. Though it is easy to identify, not everyone can appropriate this profile or this geometry.

iGuzzini does not seek to boast of explicit technological innovation, but it does seek to be an example of current development towards well understood sustainability in both technological and energy terms.Our proposal seeks to exemplify, in architecture, the conditions closest to humankind including: collectivity, ambition, and excellence. iGuzzini is located by one of the roadway hubs of Barcelona, in a fragile condition of stability on the site where it sits. Without modifying the topography, a large underground space is previously delimited, providing storage, parking, a showroom, an auditorium, and an area for technical services. Its roof is proposed as an exterior technical floor such that it works like an outdoor showroom.

Atop this underground container emerges the company building, spherical in form though slightly deformed on the south side. A large central void, occupied by the single column from which the entire building is suspended, permits greater light and energy control inside. The space within the sphere is used for offices and research facilities.