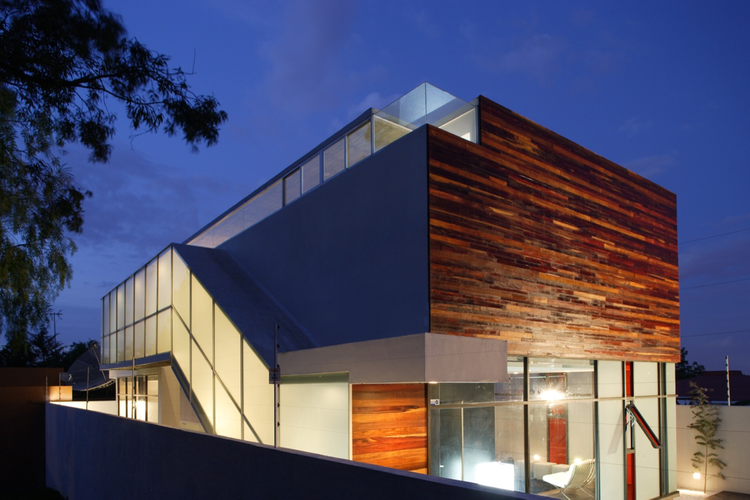 Text description provided by the architects. Located near the Lago de Guadalupe in Cuautitlan-Izcalli, where the urban aspect of greater Mexico City begins to fade, this house has an introspective character, with just one balcony overlooking the lake from the master bedroom. The rest is an interplay of cubes contained within the principal box formed by the surrounding walls.

Two solids cubes float on the upper level above three transparent ones. The solid cubes preserve the privacy of the bedrooms, illuminated by subtle openings where the walls meet the ceiling and by vertical incisions on the eastern facade. The glass cubes contain the common areas, vestibule, kitchen, dining room, and a double-height living room. These cubes are also divided by a reflecting pool at basement level, creating the constant impression that the most transparent area of all – the living room – is floating.

The surrounding box serves to contain a private garden all around the house. On the eastern facade the contradiction of the transparent cubes supporting the solid ones can be clearly read, and the irony goes even further: the volumetric arrangement is float and sustained, so that the vertical openings on the upper floor combine with the ground-floor windows to create a playful bar code effect. In this way, the interior of the house is broken into lines overseas movements into codes. A time code, a light code of light.