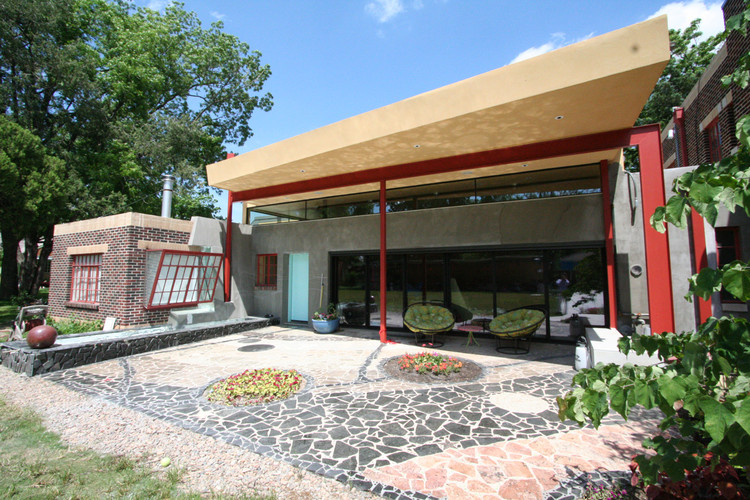 “It’s worth the battle, it’s worth the stress, it’s worth waiting for, and it really does do what art’s supposed to do. It makes you remember that we can go for it, and then life isn’t just normal and average.”

This is what psychedelic rocker Wayne Coyne had to say about his house which he took part in designing along side his wife, artist/photographer Michelle Martin-Coyne, and led by Fitzsimmons Architects.  The Flaming Lips' front man has seen to the renovation of an old warehouse space into his new master bedroom & bathroom, art/recording studio, and large family room.

The renovation is only one part of a larger master plan (known as "The Compound") that will eventually connect six adjacent properties to this central structure. The Compound is located in a run-down part of Oklahoma City where Coyne grew up, and this project is a testament to his commitment toward building up his childhood community.

The Coynes were enthusiastically engaged in all parts of the project from initial design through construction, and architects succeeded in desiging a sort of light, blank canvas that promoted the two eccentric clients toward finishing out the spaces with their own personal visions.

The main living area's roof was raised to create a clerestory, and fitted with one wall of glass doors that open out to an East patio and and the yard beyond.  The master suite overlooks a fountain and the West patio to the South, and and a private garden and acclaimed shower (aka the "Dragon Egg") to the North.  The Dragon Egg is an egg-shaped, concrete-insulated shell that contains the shower and soaking tub complete with LED lights and water jets.