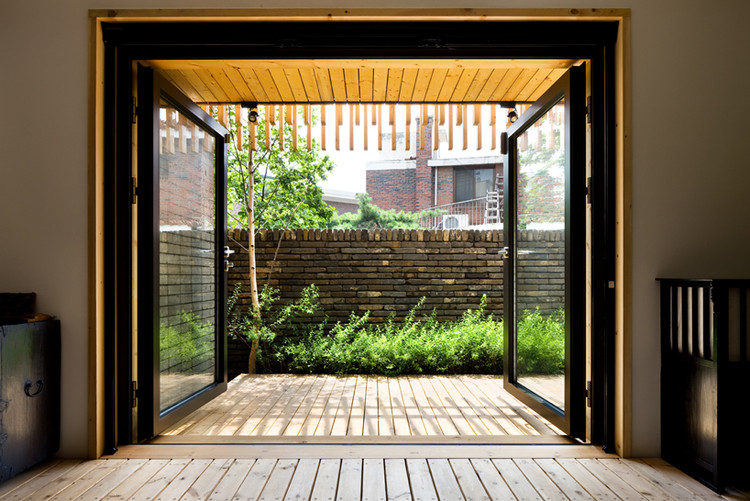 Text description provided by the architects. Repair of the Axis

The neighborhood has topographical characteristics of a basin. Thus, directions of the house were open to centrifugal or right angles. When I climbed the roof, a road came to view. The road was coiled as if it was an unknown entity drawn in the sky over the numerous houses lined on the edge of the road connecting Ansan and Seongsan.

I decided the route is a subjective meridian for closing or opening houses and substituting directions dividing windows, the entrance, stairway and floor to it. The layout of lighting, direction of wood material on the floor, flow of the fence surrounding the house and main entrance were created in accordance with the axis.

Meanwhile, there is a window that does not follow the axis. It is an east window in the living room on the second floor. In front of the low and long window which allows people to see the view outside the window when sitting on the floor lies a dark pond roughly the same size as the window. The pond reflects the color of the dawning sky from the direction of Ansan on the ceiling of the second floor. It was about in May.

As the repair work was heading towards completion, we gathered together in the living room. Some were delighted at the shadow of water reflected on the ceiling, and some were busy comparing the renovated house with previous features. Then, someone said, I feel a wind breeze inside but I'm not sure where it is coming from. It is strange because there is no wind outside. As I heard the person saying, I hit upon a word: "Manifestation of an axis." --Kim Jae-kwan