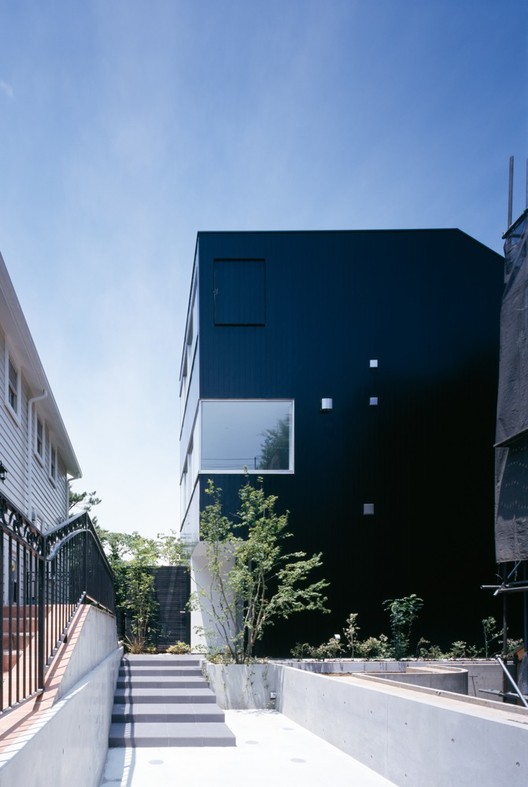 Text description provided by the architects. The site for this project was located in a quiet, elevated residential neighborhood surrounded by lush greenery, and situated fairly close to the nearest train station along a river in Tokyo. The client, who is in his 40s, had purchased a "flag-shaped" plot peculiar to Tokyo (long, narrow pole-like alley and a main space with a deep setback from the street).

Although a site that does not face the street typically gives people a negative impression, we did not think that this was the case. On the contrary, we thought that this narrow passageway could be used as an important buffer zone that would connect the house to the street, serving as a passage that linked the public realm to the private one. Special care was taken to make the best use of the greenery at the back of the site, deftly incorporating it into the interior of the house as a "borrowed landscape," as well as to ensure ventilation routes where the wind could pass through. In addition, we also gave much thought to the layout and arrangement of the windows and openings.

The first floor houses the master bedroom, guest room and dressing room. The second floor, which receives plenty of sunlight, is where the family room is located. A gentle difference in elevation was created between the dining and living rooms in order to give the single room layout a slight variation, as well as to reflect the elevated conditions of the ground around the site within the interior of the house. In the dining and kitchen area, which features a ceiling whose height has been deliberately lowered, we installed a series of continuous horizontal windows that give the space a sense of carefree comfort. These windows offer a view that extends right up until the passage in front of the house and the back of the site. The living room that faces the steeply inclined ceiling, on the other hand, forms a generous, flowing space that is continuous with the children's room and study on the third floor, as well as the roof balcony and stairwell. Skylights and high side windows allow dynamic light to pour into the house while also producing a variety of shadow effects on the walls, allowing the inhabitants to gaze at their own private "sky" while indoors.

With this building, we sought to express a certain gentleness and docility that does not seek to challenge or defy the influence of the environment - just like the personality of the owner.