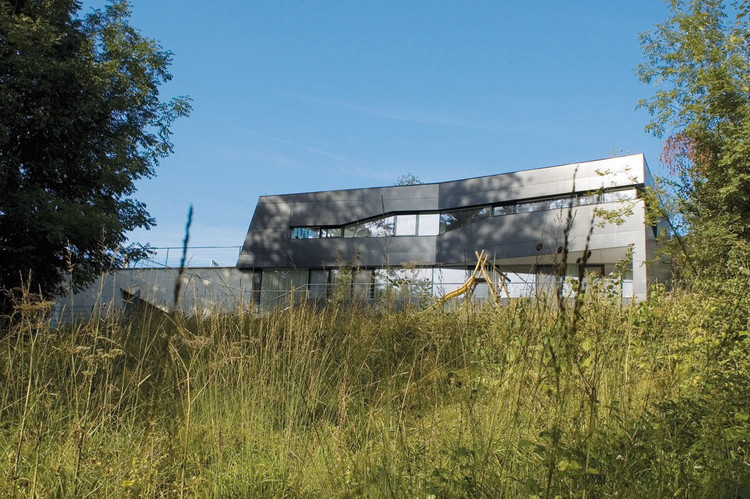 Text description provided by the architects. The client has commissioned a residential house with integrated working area. The task was to create a clear separation between the working and living areas via a shared neutral entrance. The house was built on a clearly visible plot of land situated on a hillside. It needs to ensure an optimal development of the exterior on the one hand and preservation of the residents' privacy at the same time.

The property is situated in a villa area of the city of Linz, north of the river Danube, which is also a connection point to the Mühlviertel. The proximity to both the city and countryside, with minimal industry and a low density of traffic, creates an exclusive living space. The property, which is inclined towards the east, offers a grand view over the city as well as the rural landscape of meadows and wooded areas.

The generally extensive spatial concept forms a contrast with the relatively small available building area. The architects tried to use the available area in the best way possible, resulting in the cubic shape of the final building. The ground was excavated, raised and formed as a building whose visual appearance looks similar to the surfaces of the surrounding terrain.

The pitch of the roof follows the slope of the ground. The building has an outer skin similar to the dark earth's crust and lighter coloured notches resembling fissures in the earth, giving the building a monolithic and confident character. The lighting and entrance bays are set back and emphasise a clear border between the interior and exterior.

The building has a reinforced concrete structure that corresponds to the static requirements. A new kind of fiberglass-reinforced concrete slab was used to implement the dark monolithic outer skin. The entrance area combines the working and living areas. The working and living areas on the ground floor have a very light-toned atmosphere as well as open rooms in the private area. The living area opens up towards a terrace and a swimming pool on the south side. A terrace in front of the basement opens up towards a garden and protects the residents in their sleeping and bathroom area from the glimpses of onlookers. 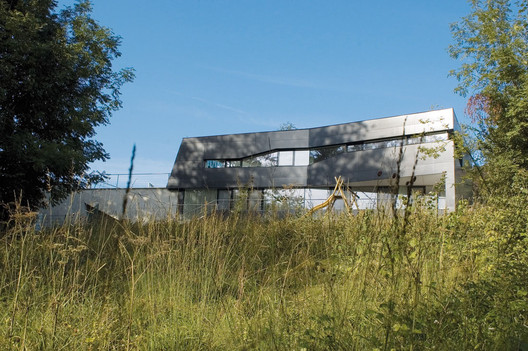