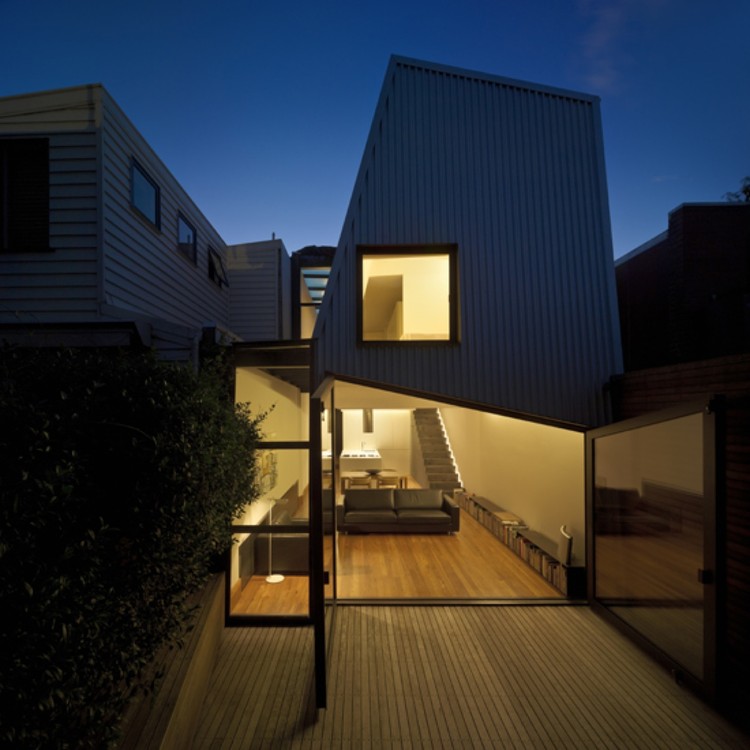 Text description provided by the architects. Muir Mendes was established in 2011 with Law Street House forming the practices first project. Located in a tight single lane street in South Melbourne the original dilapidated one bedroom workman’s cottage built in the 1880s formed the initial brief for architect’s/owner builders Bruno Mendes and Amy Muir. To pursue the desire to construct using ones own hands formed a very important part of the brief. Joe Mendes who manages steel fabrication for a large construction company formed the final link. The following 3 and a half years of demolition, excavation and construction would be referred to as ‘the daddy Mendes apprenticeship’. While working full time in practice the new house was constructed on weekends. This formed the construction program and associated cash flow.

The 93m2 site adjoined to the north and south neighboring properties and contained by a rear property called for access to natural light and a view beyond. Flanked by a two story modernist red brick façade and the ornamented timber cottage to the south, Law Street House became the fourth little pig. Constructed from plate steel the façade adopts a condition of blankness concealing the second story within the adjusted roof pitch mimicking the form of the site’s former cottage. A ‘draw bridge’ to the front window provides privacy and curates light to the front bedroom providing a signal of occupation to the house beyond.

Upon entry the double height corridor directs the gaze through the full length skylight to capture a view of the existing palm tree. The inversion of the enclosed cottage corridor is adopted in order to maximise the penetration of natural light to the interior and provide an aspect ‘out’ of the tight site. Sky becomes an important distraction for the gaze. The white walls play host to the passage of light that dances across the interior as the day passes patterning the walls as it moves.

A memory of the original lean to roof lines ripple across the underside of Level 1 defining the ‘section’ of the house. The rear of the house forms a continuation of the roof line folding down the Rescode diagram to the south. The rear façade to the east is tilted ensuring that no additional overshadowing was caused to the neighboring property. Internally the wall is pleated incorporating the heating panel and concealed blind to the window on Level 1.

Steel construction was adopted to combat the tight site and aggressive termites. Windows, doors, stairs and joinery have been fabricated from steel puncturing the white interior. Tallow wood flooring was selected given that it does not suit the selective pallet of the termite. The flooring folds through the space and up the walls providing a robust skirting.

Two bedrooms, two bathrooms, one study, open plan living and storage have been carefully crafted into the 115m2. The house is divided into two living zones with the Level 1 gallery study forming the in-between space. Borrowed light and borrowed vistas articulate a space for living, for gazing, for pondering, for thought.

Sustainable design for Muir Mendes is very much entwined with the longevity of design and durability of materials. Natural ventilation and the provision of cross breezes through the house was an important consideration. The roof access ladder is also utilised as a funnel for air movement at the end of hot days.Double glazing. Every internal space has been provided with natural light generally through the provision of skylights. The provision of natural light reduces the requirement for artificial light significantly. During the summer months a large camouflage net is suspended over the main corridor skylight which reduces heat gain and summer glare patterning the walls as the day progresses.

Law Street House was born from the desire to construct using ones own hands. The tight site called for the provision and penetration of natural light to all spaces. From the street the house responds to its neighboring forms – the red brick modernist house and the ornamented big sister workman’s cottage. Formally a hybrid of the two is adopted concealing the addition of the second story within the adjusted roof line. The reductionist plate steel façade pays homage to the workman’s cottage and its nuances. A condition of blankness is adopted as the house turns its back on the tight street seeking privacy within. The recessive black façade which sits in contrast to the light filled white interior. The use of natural materials and their inherent palettes were introduced within the white interior – steel plate joinery, stairs and heating panels, tallow wood flooring, charcoal Echo Panel to define the ‘section of the house’.

Due to the fact that we knew that we would be constructing the project with our own hands this determined the way in which details were conceived. Without being able to rely upon the input of a builder we needed to find ways to construct details in order for the project to be resolved in the manner desired.

The crafting of details formed a rigorous part of the building process with most elements being constructed twice before being constructed a third time correctly. The acquiring of skills we did not initially have had been assumed rather than realizing the time and consideration it would take to adopt the skills required to build. The mental and physical challenge associated with constructing only on weekends while working full time during the week ensuring that a momentum was maintained. The pleasure of being directly involved, rather than sitting on the side lines, in one of the most important phases of the design process. 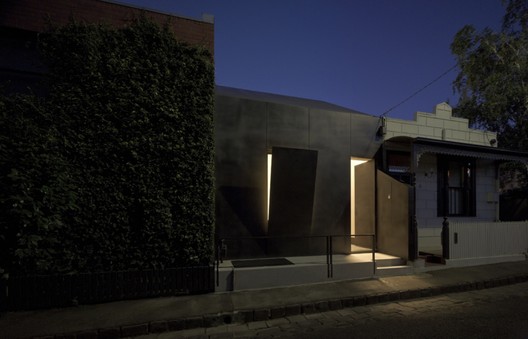